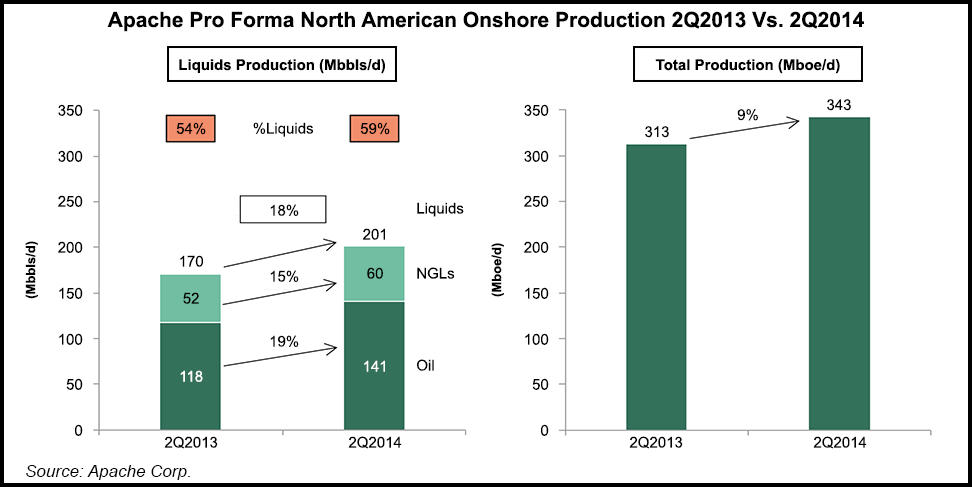 Farris led a conference call to discuss the latest results. It’s been an interesting period for the global independent, which last month was hit with a demand by major investor Jana Partners LLC that called on management to sell all of its international operations and drill exclusively in the United States (see Daily GPI, July 22).

Apache already was considering ways to monetize part of its international operations, and the evidence is “clear” that the United States is the No. 1 exploration and production target. Canada is important to the portfolio as well, Farris said.

Despite a long list of asset sales over the past year, including in Canada and the Gulf of Mexico, North America’s pro forma output in the latest period averaged 18% higher than in 2Q2013. The biggest focus remains in an opportunity set across the 1.7 million net acres it holds in the Permian Basin.

“And through the first half of the year, the Permian region’s performance is ahead of our plan. In fact, we surpassed the significant milestone earlier this year as we celebrated reaching 150,000 boe/d net.”

Cash flow has been strong enough from the Permian that it should fully fund the capital program in the region for the year.

“We expect to deliver over 23% liquids growth and more than 20% boe growth for the year,” Farris said.

During the second quarter, Apache averaged 37 rigs in the Permian, including 24 horizontals. Production rose 4% sequentially and year/year output climbed 26%.

“We had strong Wolfcamp Shale results in Reagan County [TX] in the southern Midland Basin” of the play, said Farris. One well, SRH 1335, had a 24-hour initial production (IP) rate of 1,184 boe/d. “We also had impressive results in the Bone Spring of the Delaware Basin, with several new wells coming on in Reeves and Loving County, including the Robin No. 8 with a 24-hour rate of nearly 1,200 b/d.”

In the Upper Eagle Ford Shale in Brazos and Burleson counties in East Texas, strong results led Apache to add more acreage; it now has more than 2,000 net acres. In that play, Apache has begun shifting to an appraisal mode and to pad drilling to reduce costs.

It spud 26 wells in East Texas during the quarter, with most scheduled to come online in the third quarter. The Reveille 8H was completed during the second quarter with a 24-hour IP of 987 boe/d, Farris said.

“We also have early test on wells coming on in first part of the third quarter, including the nearby Reveille 10H and 14H, which had 24-hour IPs of 906 boe/d and 1,220 boe/d, respectively. With these strong results and our tremendous land position, we decided to further ramp our activity up and should be running 10 rigs by year-end in this play.”

“We are planning to drill a total of six wells this year to further delineate the play, and we should have four rigs running active in this play by year-end,” said the CEO.

The only disappointment in the U.S. onshore was in the Anadarko Basin. “Our total wells drilled to date for the year are 26% behind plan due to weather slowdowns, as well as mechanical difficulties in both drilling and completion,” Farris said. Apache now is retooling the region, changing personnel and scaling back activity.

“We continue to believe in the growth opportunities in the Anadarko Basin, we just need to slow down and assure ourselves we’re making good investment decisions over the long term.”

Apache management views the “North American onshore business as one large resource comprised of several different plays, and we will allocate capital and resources to the best opportunities within that portfolio. Despite the challenges we had in the Anadarko Basin, I want to reiterate our 15% to 18% North American onshore liquids guidance…”

In Canada, Apache is concentrating its efforts in the liquids-rich Duvernay and Montney shales, where IP rates have been encouraging.