Executives at Appalachian pure-play Antero Resources Corp., the nation’s second largest natural gas liquids (NGL) producer, are warning that without an adequate build in propane inventories through the fall, the world would be undersupplied this winter. 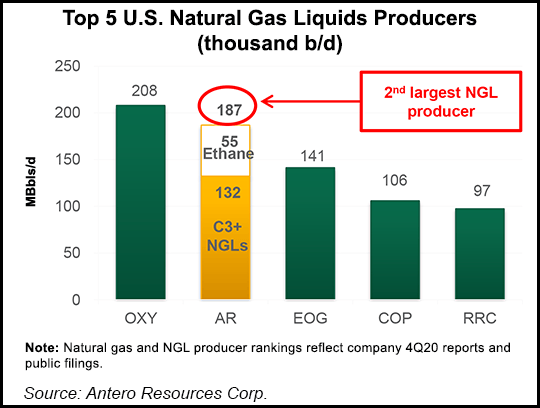 Antero, which also is the nation’s largest NGL exporter, is moving about half its volumes overseas. Including hedges, the company said its average liquids price during the first quarter was $39.79/bbl, up 76% from the year-ago period. A cold winter and stocks that were depleted throughout the worst of the pandemic set the stage for prices to shoot higher, something Cannelongo said could happen again next winter, especially for propane.

“Given the current macro market conditions and oil price environment, this needed growth in LPG production is unlikely to materialize, and we believe we could see another significant market imbalance this upcoming winter season,” he said during the earnings call last week.

Propane supplies are currently running about 34% below the five-year average and inventories are 30% below last year’s levels. Other producers across the country this earnings season have indicated that they’re not prepared to extract more oil and natural gas until the market sends a clearer demand signal and economic growth begins accelerating.

Cannelongo said the company has protected itself from the other possibility of seasonal weakness during the warmer months and a sluggish pandemic recovery. The company has added liquids hedges and now has 45% of those volumes hedged at an average price of $36/bbl in 2Q2021 and 3Q2021.

The company also saw a spike in its natural gas prices during the first quarter, thanks to what CEO Paul Rady attributed to the expansive firm transportation portfolio that “provides flow assurance during periods of pipeline capacity constraints and during periods of high prices in other regions of the U.S.”

A colder winter saw Antero’s natural gas prices at a 41-cent premium to the average New York Mercantile Exchange price. Rady also said Antero’s price realizations were 92 cents better than average pricing across Appalachia. Overall, including hedges, Antero reported an average realized commodity price of $4.05/Mcfe during the first quarter, up from $2.99 in the year-ago period.

Antero produced 3.3 Bcfe/d during the first quarter, including 170,000 b/d of NGLs. First quarter volumes were flat from the year-ago period. Rady said Antero is considering having some of its gas production certified as responsibly produced, or according to a set of environmental standards established by a third party. The certifications are growing in Appalachia and across North America as demand grows for a differentiated product amid the energy transition.

Management also said the company established a U.S. record for lateral feet drilled in a 24-hour period at 12,118 feet during the quarter. The company is currently operating three drilling rigs and two completion crews in Appalachia.

The company generated $320 million of free cash flow during the first quarter. The company expects to cut absolute debt to under $2 billion by next year, in line with a debt reduction program implemented in late 2019.