Bolstered by hedging, favorable well economics and a diverse firm transportation portfolio, Denver-based Antero Resources Corp. has increased its production guidance for full-year 2016 on the strength of its first quarter output. 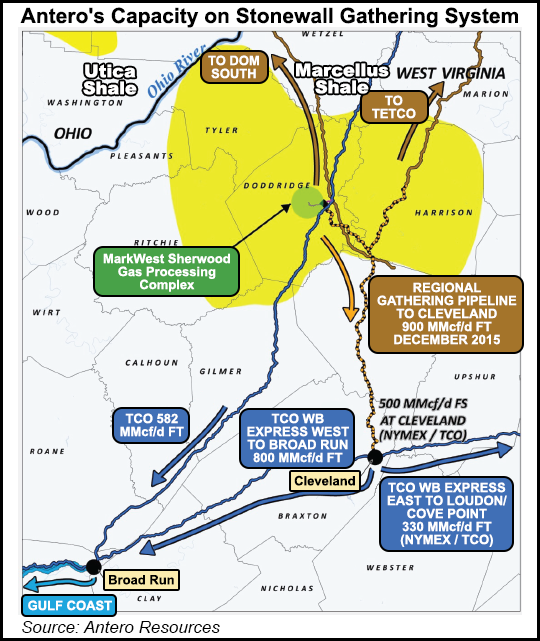 Liquids production increases were driven by a significant jump in ethane output to around 12,000 b/d from 2,179 b/d in the previous quarter. Antero started recovering ethane in December, when the first de-ethanizer came online at MarkWest Energy Partners LP’s Sherwood processing plant in Doddridge County, WV.

The company’s continued production growth in 1Q2016 was supported by a hedging book that netted a premium to the New York Mercantile Exchange (Nymex). For the quarter, including NGLs, oil and hedges, Antero realized an average of $4.14/Mcfe, $2.05/Mcfe above Nymex.

CFO Glen Warren said during a quarterly conference call with analysts Thursday that the E&P could achieve 17% year/year net production growth in 2016 spending $675 million on drilling and completion, “significantly below the projected hedge revenues in 2016 of over $1 billion.” But 2016’s drilling and completion budget also includes $625 million aimed at realizing Antero’s 20% growth target for 2017, “which we feel very confident about given the continued capital efficiency, flexible [drilled but uncompleted wells] inventory and volumes sold forward at attractive prices.”

“The lowest hedges we’ve put in place in many years have been in the $2.75 range, and so is that an ideal price? No. If you asked us today where do we think longer-term gas prices are going to be, somewhere in the $2.75-$3.50, or even $3.75 range. So we might be looking towards those. I think we can develop at quite a bit lower prices than that…but we’re looking for higher end prices, and we’re extremely well protected over the next four years.”

The strong hedge position, combined with continued growth in its proved reserves, saw Antero’s $4.5 billion borrowing base reaffirmed this spring.

Management said Antero’s 2016 plan to run one rig in the Utica and six in the Marcellus is largely a reflection of westbound firm transportation capacity on Rockies Express Pipeline LLC, a situation that could change on the completion of Energy Transfer Partners LP’s ET Rover project (see Shale Daily, Oct. 31, 2014).

“We certainly like our Utica play very much, and the well results, but..all we have on the REX westbound lateral is 600 MMcf/d of firm transport, and that lateral is running full,” Rady said. “They’ve filed for an expansion that’s been approved, but it won’t become available until the middle of 2017. And so until that time…the one rig in the Utica will keep us right there at 600 MMcf/d.

“The relief that we are expecting is Energy Transfer’s Rover Pipeline, and that will come to the Seneca area by mid-2017. So when that comes we’ll have as much as 800 MMcf/d of additional takeaway on Rover that ties to our Midwest and our Gulf markets. So that’s why we’ve reallocated capital over to the Marcellus side for the next year or 15 months is to just ride that constraint.”

As it stands, Antero probably won’t be looking to sign on to new projects to grow its transport capacity moving forward, Rady said.

“The new projects generally are quite a bit more expensive than the ones that we have now, because they’re new builds, whereas a lot of ours were either reversals, first of all backhauls, then reversals where the molecules flow in a different direction, or compression projects…that’s why we have such low [firm transport] relative to new builds.

“And so what would we do if we needed more capacity even to accelerate beyond what we have now? Odds are that there are a number of more distressed parties that have signed onto plenty of future projects that are in distress and probably won’t be using their capacity…if pipes are under-filled and we needed more, then we’d look to be able to use somebody else’s space at a discounted rate. That’d be probably the first direction we’d go.”

As well costs continued to decline in 1Q2016 as a result of greater operational efficiencies and service cost reductions (see Shale Daily, April 14), Antero’s longer lateral lengths in the Marcellus have shown little degradation in estimated ultimate recovery (EUR), management said. With 33 wells completed with laterals above 10,000-feet, EURs have averaged just over 2 Bcf per 1,000 feet of lateral, equivalent to laterals below 10,000 feet.

“We have 47 wells in the completion queue today in the 10,000-foot to 14,000-foot lateral length range. This is an important point, as longer laterals improve well economics by spreading the fixed vertical and surface costs over a larger reserve base,” Rady said.