Antero Resources Corp. has sold a portion of its future Appalachian natural gas production to an affiliate of J.P. Morgan for $220 million as part of a broader effort announced last year to sell more assets and cut debt. 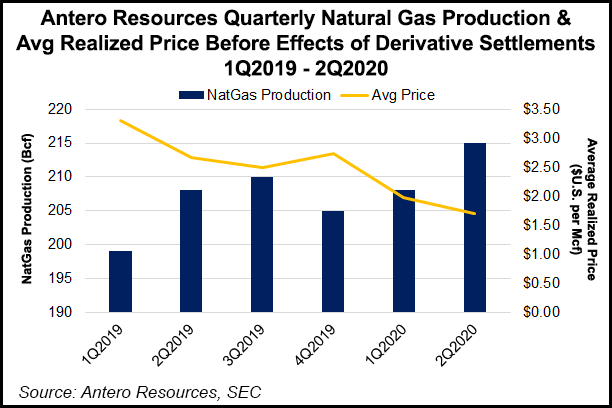 The volumetric production payment (VPP) completed with the bank is effective July 1 and will cover a seven-year term ending June 30, 2027. Under the deal, production sold to J.P. Morgan from the company’s dry gas properties in West Virginia includes 60 MMcf/d in the second half of 2020 and 75 MMcf/d in 2021. Volumes under the VPP then decline to 40 MMcf/d by the first half of 2027.

Assuming the bonds are tendered and repurchased, CFO Glen Warren said the company has reduced near-term bond maturities by more than $1.4 billion since 4Q2019.

The company implemented an asset sale target of $750 million to $1 billion late last year to help reduce debt. Antero has so far sold $751 million of assets since then. The other transactions included the sale of $100 million of Antero Midstream common stock, a $402 million overriding royalty interest sale and a $29 million hedge monetization.