Because of the “pent up” supply of gas in the Marcellus and Utica shales, shipper interest in capacity on ANR Pipeline’s Lebanon Lateral 2014 Reversal Project was much greater than anticipated, said an executive with TransCanada, which owns ANR. 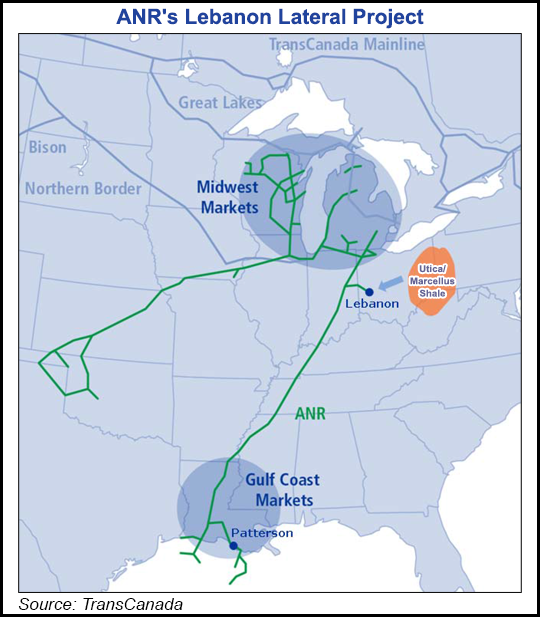 “We’re a good conduit to a lot of markets,” including the Midwest, north out of Ohio and the Southeast markets, said John Hampton, director of business development for TransCanada, in explaining the interest in the project.

Shippers bid for 350,000 dth/d of firm transportation capacity on the Lebanon lateral project during the open season, which closed on Oct. 22 (see Shale Daily,Sept. 25). ANR was soliciting bids for only 250,000 Dth/d and an anchor shipper had already subscribed for 100,000 Dth/d for a 10-year term.

“I anticipate that there will be more capacity that we will sell…We have not set a timeline” on when that will be, Hampton said.

The project is targeted for an in-service date of March 1. It will receive natural gas from the Dominion Transmission Inc. interconnection at Lebanon, OH, and provide transportation services to points on the ANR system. Facility modifications associated with the Lebanon Lateral 2014 Reversal include the installation of valves, yard piping and other ancillary facilities at Lebanon, Glen Karn and Sulphur Springs to permit bi-directional flow on the Lebanon Lateral.

The open season for a second, related project, the Glen Karn 2015 Project, closed on Oct. 23. “We are still evaluating the bids. They look very promising,” said spokeswoman Gretchen Krueger. The project is designed to provide transportation service on ANR from its existing interconnection with Texas Eastern at Glen Karn, OH, to points on the ANR system. ANR solicited bids for up to 400,000 Dth/d for the project, and will determine the facilities necessary to provide the service offered based on the timing and level of interest expressed. The projected in service date for the Glen Karn 2015 Project is targeted for November 1, 2015.

“The 90-mile Lebanon Lateral is one of the few existing pipeline infrastructure systems currently available to Northeast shale producers to access Midwest and Gulf Coast markets,” said Dean Patry, vice president of U.S. pipelines, central region for TransCanada, when the open seasons were announced. “These two projects will allow the Utica Marcellus shale producers the opportunity to reach a larger market at competitive prices.”