A Louisiana parish has filed a lawsuit against 13 oil and gas companies, alleging their activities over several decades befouled the parish’s coastal wetlands and placed it at an increased risk of flooding. 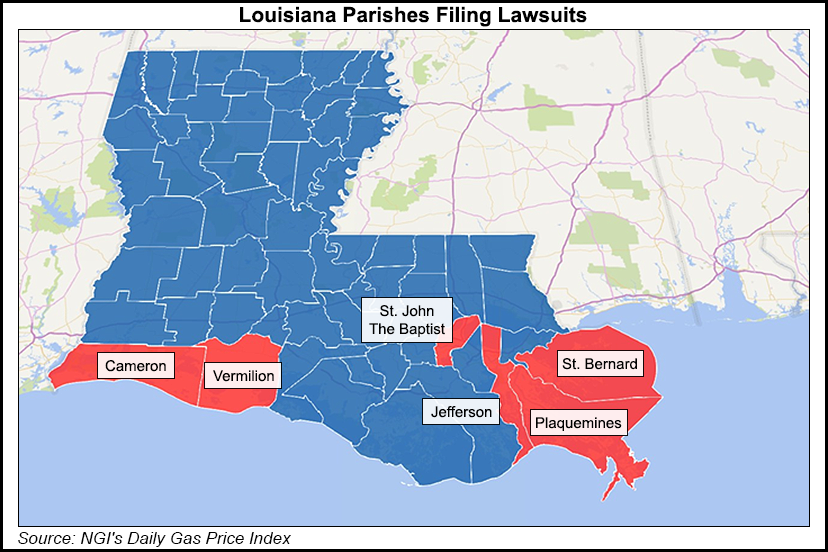 “While we all recognize the tremendous impact oil and gas activities have had on our local economy, every person who has ever fished, hunted and enjoyed the natural beauty of St. John the Baptist Parish is also aware of the environmental issues caused by oil and gas activities,” Dinvaut said in a statement, according to the Times-Picayune. “My message is simple: Clean up the mess that you have made and restore our coast to its original condition.”

St. John the Baptist Parish alleges the companies polluted its coastal waters while developing the Frenier and LaPlace oil and gas fields, violating the state’s Coastal Zone Management Act of 1978. The parish’s complaint cites “numerous oil and gas wells” within its coastal areas, as well as unlined waste pits into the earth, many of which have never been closed.

The parish claims the aforementioned structures “were not built to withstand the expectable adverse conditions without releasing pollutants, were not prepared using best practical techniques to prevent the release of pollutants or toxic substances, and were not designed and constructed to prevent leaching, control leachate production, or prevent the movement of leachate away from [their facilities].”

Talbot, Carmouche & Marcello, a law firm based in Baton Rouge, LA, filed the lawsuit on behalf of the parish.

In a statement, Don Briggs, president of the Louisiana Oil and Gas Association, said the organization opposes the lawsuit filed by St. John the Baptist Parish, as well as others filed previously by other parishes that leveled similar accusations.

“This is just more of the same from the same small group of trial lawyers,” Briggs said. “We know the biggest challenges facing this state now is loss of employment, particularly in the oil and gas industry. Now is the time to call on our state leaders to push back against theses frivolous and fallacious lawsuits and restore confidence in those companies wanting to invest in Louisiana.”

Last month, the U.S. Fifth District Court of Appeals denied a petition by the Southeast Louisiana Flood Protection Authority-East for a rehearing of its lawsuit against oil and gas companies, alleging similar damage to coastal areas.