Another Colorado district court judge ruled Wednesday that state regulation of the oil and natural gas industry trumps local jurisdictions, the third ruling to turn back a series of local attempts to ban drilling activity in general and hydraulic fracturing (fracking) in particular. 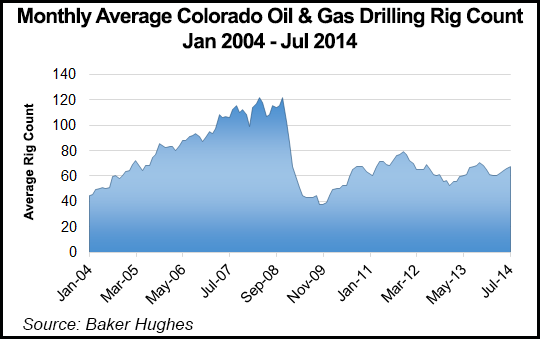 Boulder County District Court Judge D.D. Mallard, who in July ruled that a City of Longmont charter amendment was counter to the state’s regulations (see Shale Daily, July 15), ruled that another city, Lafayette, CO, lacks the authority in a “matter of mixed state and local concern” to negate the state’s authority.

Colorado Oil and Gas Association (COGA) CEO Tisha Schuller said the latest Mallard ruling is “unequivocal, saying the operational conflict between the state’s robust framework of regulations and local bans is ‘obvious and patent on its face.'” Schuller said she hopes this third ruling in a month ends efforts to pass what the courts are ruling are illegal local bans.

Nevertheless, the Longmont City Council recently decided to appeal the court’s summary judgment dismissal of its 2012-imposed fracking ban. Earlier on Wednesday, Schuller said this action by the city was “disappointing,” prolonging the legal fight that “we would prefer is behind us.

“When a sitting legislative body chooses to flout, instead of respect, state law, it wastes taxpayer and civic resources that instead could be devoted to engaging and meaningful work on responsible energy development,” Schuller said.

Continued legal maneuvers have come despite the announcement early in August by Gov. John Hickenlooper that a statewide task force headed by local government and industry leaders will develop proposed legislative solutions.

The 18-member citizen task force conceived by Hickenlooper is still struggling to get started, but one of its co-chairs indicated last week that the announcement on the panel’s members should be coming soon (see Shale Daily, Aug. 21).

Schuller said that so far, more than 30 communities across Colorado have created unique solutions that address their local concerns about oil/gas development while staying within the limits of state laws. “[Elsewhere] the bans have been unnecessary, divisive and costly for taxpayers,” she said.