Chevron Corp. on Thursday sanctioned the massive Anchor oil and natural gas project in the U.S. Gulf of Mexico (GOM), the first greenfield launch in nine years and the first high-pressure project for the domestic offshore. 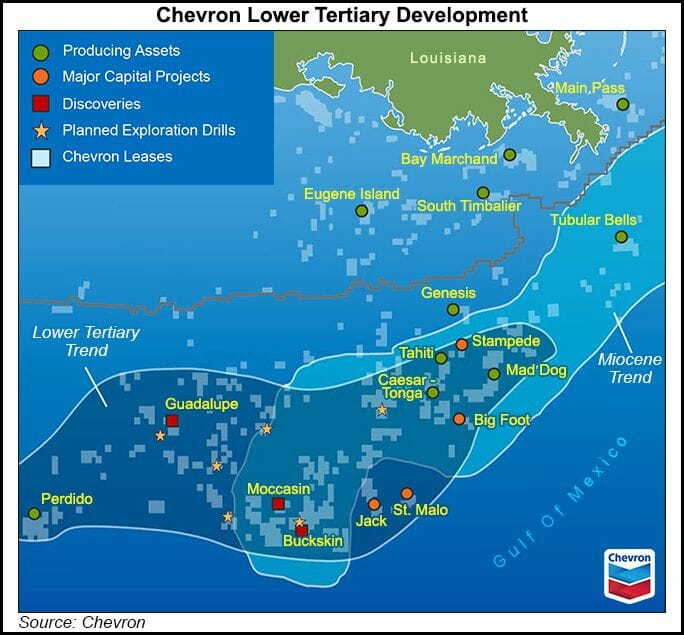 The Anchor field, sited in Green Canyon (GC) within the Lower Tertiary Trend, would be developed using new technology capable of handling pressures of 20,000 pounds/square inch (psi), opening access to other high-pressure resource opportunities across the offshore for the industry.

The sanctioning came two days after Chevron announced it would reduce investments in some natural gas-heavy projects because of low prices, including in Appalachia and for the proposed liquefied natural gas export project in Kitimat, British Columbia.

“For new projects in the Gulf of Mexico, we have reduced development costs by nearly a third, compared to our last generation of greenfield deepwater investments,” said President Steve Green of Chevron North America Exploration and Production. “We’re doing this by standardizing equipment, utilizing fit-for-purpose surface facilities that require less capital and employing drill to fill strategies.

“At Anchor, we streamlined our front-end engineering and design phase and are utilizing more industry standards in our designs and equipment to lower costs while maintaining operational excellence.”

Anchor, sited about 140 miles off the Louisiana coast in water depths of 5,000 feet, initially is to require around $5.7 billion in investment. The first stage consists of a seven-well subsea development and semi-submersible floating production unit. First oil is anticipated in 2024.

The planned facility has a design capacity of 75,000 b/d of crude oil and 28 MMcf/d of natural gas. Total potentially recoverable resources for Anchor are forecast to exceed 440 million boe.

Total, which holds working interests in two other Chevron-operated producing fields, Jack (25%) and Tahiti (17%), also is a co-owner in Chevron’s Ballymore project. In addition, Total operates the North Platte development with a 60% stake, with Equinor SA holding a 40% interest.

Like Anchor, North Platte would use 20,000 psi technologies, Total said. The field development plan is based on eight subsea wells and two subsea drilling bases connected via two production loops to a newbuild, lightweight floating production unit. Production, which at plateau level is expected to average 75,000 b/d of oil, would be exported through existing oil and gas subsea networks.

“The FID for Anchor and the decision to launch FEED for North Platte are tangible examples of our strategy to increase our footprint in the deepwater Gulf of Mexico,” said Total’s Arnaud Breuillac, president of Exploration & Production.

“The Anchor project benefits from reserves with upsides, allowing for a stand-alone development at a competitive cost. The North Platte project, meanwhile, marks Total’s return to the region as an operator. We’re aiming for a final investment decision in 2021.”

By sanctioning Anchor, Chevron also showed that the U.S. offshore still has attractive investment opportunities for large greenfield projects, he said. “While over 80% of projects sanctioned in the last five years are shorter cycle subsea tiebacks, standalone developments like Anchor are still able to compete for development capital.”

Anchor is expected to be the first of three 20,000 psi projects that Wood Mackenzie is forecasting will reach FID within the next 18 months.

“We estimate that these three projects combined hold approximately 1 billion boe in reserves and will require over $10 billion of capital investments,” Rostant said.

Wood Mackenzie has valued Anchor at $1.5 billion, with a development-cycle breakeven of $51/bbl Brent.