The prolonged decline in the nation’s oil and natural gas rig count, falling production and a dwindling inventory of drilled but uncompleted (DUC) wells, paired with the long-awaited increase in gas demand from nearly every corner of the market, could signal a recovery in commodity prices sooner rather than later. 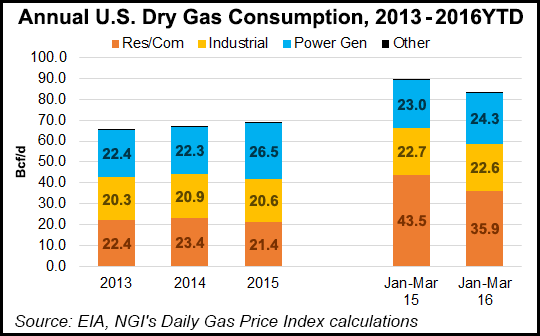 This was a bullish assessment offered by one analyst at an industry conference in Pittsburgh this week. But while others disagreed and tended to lean toward the lower-for-longer scenario, many of the expert presentations didn’t deny certain factors that could help lift the industry out of the doldrums as early as next year. Relief, they said, could come for gas-heavy producers first.

“Natural gas production volumes are coming off pretty significantly,” said Ponderosa Advisors LLC Managing Partner Bernadette Johnson. “They were up above 73 Bcf/d on the dry gas side and now we’re only at about 70.5 Bcf/d, and that’s only over the past few months, so we’re seeing some declines.

Johnson delivered her remarks on Wednesday at Hart Energy’s annual DUG East Conference & Exhibition. Ponderosa is a consulting firm that works for private equity, hedge funds, exploration and production (E&P) companies and utilities, among others. “So at the end of the day, we are in the business of predicting price,” Johnson assured attendees of the firm’s projections.

“We have a lot of structural demand coming online on the gas side. We’re starting to see liquified natural gas (LNG) exports; we have a lot of power demand — a lot of that is structural — it’s new gas build, it’s retiring coal, it’s not just because of low prices,” she said. “You’ve still got industrial demand coming on, a little bit of growth in residential/commercial, you’ve got Mexican exports.

“All of these things are years in the making and they’re starting to come on, so we can’t have declining [gas] production, which also means we won’t have $2.75 prices next year either.”

Johnson added that even with marginal rig additions like those seen in recent weeks and a dwindling inventory of DUCs, it won’t be enough to keep production flat. In February, there were about 4,000 DUCs nationwide, Johnson said, citing information from drillinginfo.com. On Wednesday, that number had dwindled to 3,100 from a peak of about 4,600 late last year.

“If we continue slight [DUC] declines, how quickly would we run out of DUCs? Later this year.” Johnson said. “If we ramp-up and try to keep production flat, we run out sooner.”

If an increase in demand prompts a supply response, Johnson said Appalachian producers are poised to benefit. She said the region is nearing debottlenecking in some areas, with excess pipeline capacity set to come online in the months and years ahead. While more infrastructure won’t significantly impact all pricing points, some, such as those on Texas Eastern and Columbia Gas Transmission, could see basis tighten.

“Excess capacity means we’re about to get an economic uplift up here,” she said. With infrastructure growing, the demand stack getting stronger and a projected shortfall in production, Ponderosa is predicting a $4.50/MMBtu Henry Hub price by 2017. If gas does go that high, it could be short lived, especially if oil breaches the $50 mark for an extended period of time.

With oil already hovering near $50 or more in recent weeks, E&Ps have began layering on more hedges and adding back rigs, Johnson said. With any sustained increase in oil prices, she added, production would ramp back up, boost associated gas recovery in oilier plays and bring gas prices back down.

“As the crude price recovers, the natural gas price comes down, because you bring on more of that associated gas and you don’t need $4.50 anymore once you have the Permian and Eagle Ford gas back,” Johnson said. “There’s still a price ceiling, you’re not going to see $6 gas, but we expect you’re going to see a really strong price signal this winter, enough to bring more gas-directed rigs back.”

William Marko, managing director of the energy investment bank group at Jefferies LLC, tempered Johnson’s outlook. He noted that last week’s New York Mercantile Exchange forward price for West Texas Intermediate showed it hitting $50.60/bbl in 2017, with an uptick on the way of $52.07/bbl in 2018. Natural gas, according to the forward Nymex, hits $2.67/MMBtu in 2017 and doesn’t move above $3.89 through 2025.

Deputy Director for Energy Security at the U.S. Department of Energy Carmine Difiglio noted, however, that there are encouraging signals on the horizon for natural gas producers. While international gas prices have lowered substantially, “LNG exports are going to explode,” he said. “We have a number of important LNG export projects under way and we’re very confident that we’ll hit as much as 10 Bcf/d of exports by 2020 or so, and we expect that this will continue to grow, with total exports hitting 20 Bcf/d by 2040.”

Although global trade is currently down on a weak international economy, Difiglio said his office still expects U.S. LNG exports to be competitive given how low natural gas prices are here and how competitive the contracts are as a result.

“Regardless of what happens to the LNG market and how soft it can become, we expect that LNG customers will continue to take delivery of U.S. LNG,” he said, adding that demand for ethane is increasing with more crackers set to come online and shale exports headed overseas. He also said there’s a boom expected in Mexican gas exports (see Daily GPI, June 2). Basins near the Mid-Atlantic and the Southwest should also benefit from growing demand for power, where these regions lead the country in proposed natural gas-fired plants, according to the Energy Information Administration (see Daily GPI, May 19).

But predicting prices is a guessing game, as always, Difiglio said.

“It’s likely we’re going to be entering into a more volatile period,” he said of oil. “First of all, the companies are cutting back, not just the shale players, but the big oil companies with deep sea operations and Gulf of Mexico projects. With decline rates in existing fields, we’re going to see a potential liability for supply to keep up with the world increase in demand.”

If the global economy improves anytime soon, he said, another 1.5 million b/d of additional oil demand is expected.

“We’re likely to see even more volatility in prices as unplanned outages in the Middle East and Northern Africa continue to rile the market. It’s unpredictable.”