Oklahoma Gov. Kevin Stitt on Friday asked President Trump to declare the Covid-19 pandemic a force majeure event so that oil producers can curtail output without fear of having their leases cancelled. 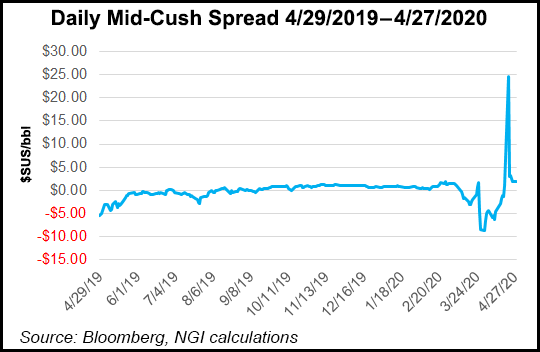 Citing a “near total disappearance of demand for oil and gas products as well as the imminent lack of available storage,” the Republican governor told Trump in a letter that declaring the outbreak an act of God “will be a necessary step to encourage and support those operators who choose to stop production until demand returns and storage becomes readily available.”

The Petroleum Alliance of Oklahoma thanked Stitt for the letter in a tweet on Saturday.

The Oklahoma Corporation Commission (OCC) last week issued a state-level order analogous to what Stitt is requesting from Trump, allowing producers to shut-in uneconomic production without losing their leasehold rights.

New Mexico adopted a similar emergency measure for producers operating on federal land, while regulators in Texas and North Dakota are weighing relief options that could include prorationing, i.e. mandatory production cuts.

In a note to clients on Monday, analysts at Tudor, Pickering, Holt & Co. (TPH) said “while we have little insight into the legality of these matters,” federal intervention in this case would seem “somewhat overkill if the sole intent is to protect leashold,” since the OCC ruling already addressed the matter.

“A broader claim requested seemingly could entangle the different interests of landowners, the upstream industry, and midstream and downstream counterparties,” the TPH team said.

Stitt stressed the environmental and economic threats posed by overproduction of oil under current market conditions, saying, “This could lead to difficult decisions for producers regarding where to position these hydrocarbons with no place to store them and no one to buy them.”

The ominous warning follows a Reuters report that Russia is considering burning off crude oil as a solution for the lack of storage capacity, an action that would have been unthinkable before the pandemic.