Natural gas futures fluctuated Friday, posting an early double-digit gain before dropping deep in the red by midday amid profit-taking to close out the week. The June Nymex gas futures contract ultimately settled at $7.663/MMBtu, down 7.6 cents day/day. July declined 7.0 cents to $7.765. 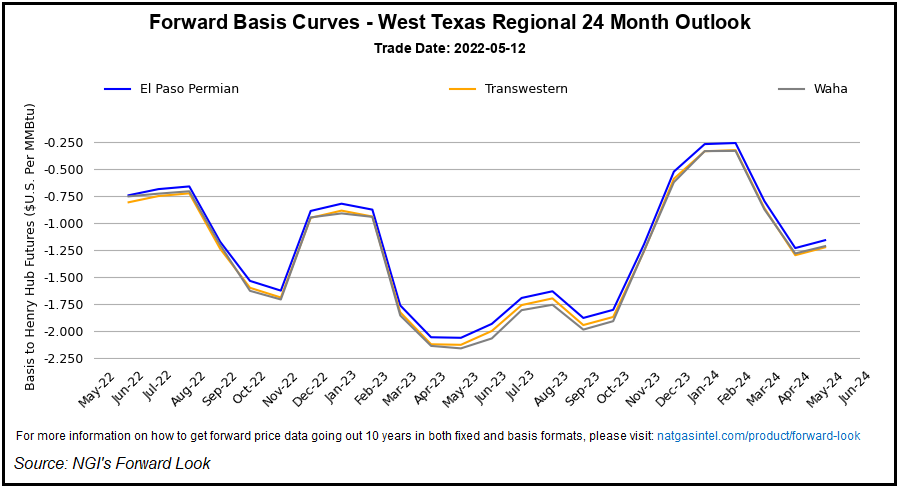 For all the see-saw action in trading – a common occurrence in recent weeks – analysts said fundamentals point to upward pressure on prices heading toward summer.

Weather demand, while characteristically uneven in May, leans bullish overall, forecasters said. Intense bouts of heat are expected across large swaths of the South the remainder of this month and into June. Cooling demand from Texas to the Southwest is broadly expected to offset milder conditions elsewhere in the near term, and then more consistently widespread heat is projected for much of the Lower 48.

U.S. liquefied natural gas (LNG) demand also is expected to prove elevated over the summer, given robust needs in Europe for American supplies of the super-chilled fuel.

While volumes have been choppy this spring amid repair and upgrade projects at LNG facilities, demand has held strong. This is in part because of already low European supplies as well as countries on the continent moving with haste over the past two months to scale back dependence on Russian gas. Members of the European Union are eager to distance themselves from the Kremlin in protest of Russia’s invasion of Ukraine.

Tudor, Pickering, Holt & Co. (TPH) analysts said “movement beneath the surface” points to a “constructive trend” for LNG this summer.

“Feed gas demand has remained in the 12-12.5 Bcf/d range for weeks now…as various facilities take turns at maintenance,” the TPH analysts said. However, with such projects scheduled to wrap up in the weeks ahead, “we see line of sight to exports again exceeding the 14 Bcf/d threshold” – around record levels.

Production, meanwhile, has struggled for weeks to return to the 97 Bcf peak early in the past winter. A challenging cocktail of harsh weather that stalled output in the North, spring maintenance work and soaring inflation that has driven up production costs hampered output levels. Production this week has hovered around 95 Bcf and had dipped to as low as 92-93 Bcf early this month, according to Bloomberg estimates.

“Price risk remains to the upside,” said EBW Analytics Group’s Eli Rubin, senior analyst. He noted the expected jump in LNG and “non-existent May-to-date production growth” that “increased the chance for a bullish surprise over the next 30-45 days.”

With production light and summer weather arriving early in the South, analysts are concerned that utilities may struggle to refill gas in storage during the current injection season.

The Energy Information Administration (EIA) on Thursday reported a 76 Bcf injection into U.S. natural gas stockpiles during the week ended May 6, a print slightly leaner than predictions. The five-year average for the period was an 82 Bcf injection.

Total Lower 48 working gas in underground storage rose to 1,643 Bcf, but remained 16% below five-year average levels, according to EIA.

Bespoke Weather Services said that, following strong demand in recent days, it expects another tight print with the next EIA inventory assessment. The trend could continue.

“With the heat we see in the forecast, it may be difficult to even get a single triple-digit build this season, which would be wildly impressive,” Bespoke said. “We must continue to be mindful of very wild day-to-day price swings in either direction. But if an overall hotter pattern does remain in place, some variability aside, our view is that the risk ultimately remains skewed toward more upside, with a very real risk that we have not yet seen the highs in prices for the year.”

After surging nearly 80 cents Wednesday in a rebound from an earlier trouncing, spot gas prices dropped Thursday and then bounced back again on Friday.

For the week ahead, NatGasWeather said national demand would be near normal as the northern half of the Lower 48 enjoys highs of 60s and 70s. However, much of the southern United States is expected to remain “very warm to hot with highs of 80s and 90s,” along with triple-digit highs in the Southwest.

“The nation’s strongest temperature driven demand going forward will be across the southern U.S. as highs consistently reach the mid-80s to 90s across Texas, the South and Southeast. There’s potential for more impressive heat to close out May” in those regions, the firm said, setting up the potential for robust cooling demand heading into June.

Meanwhile, major wildfires in the Southwest and California threaten to add to the intensity of heat and potentially impact storage facilities. Drought conditions across the West worsened with a lack of moisture over the winter, leaving vast swaths of the western United States vulnerable to fires.

The Coastal Fire blazing about 50 miles southeast of Los Angeles, for one, is close to the Aliso Canyon gas storage facility.

What’s more, expectations are mounting for a third consecutive year of robust hurricane activity in the Atlantic. This could ultimately affect production in the Gulf of Mexico and send-outs of LNG.

AccuWeather said the coming season could deliver 16-20 named storms, of which six to eight could become hurricanes.

The 2020 season proved the most active on record. That year, 30 named storms, 14 hurricanes and seven major hurricanes developed.

The Atlantic hurricane season officially starts on June 1 and ends on Nov. 30, though named storms have become increasingly common in May in recent years.