A unit of American Midstream Partners LP has placed the Midla Natchez Pipeline into service, a final step in the long-running saga of replacing the 91-year-old Midla pipeline system in Louisiana and Mississippi. 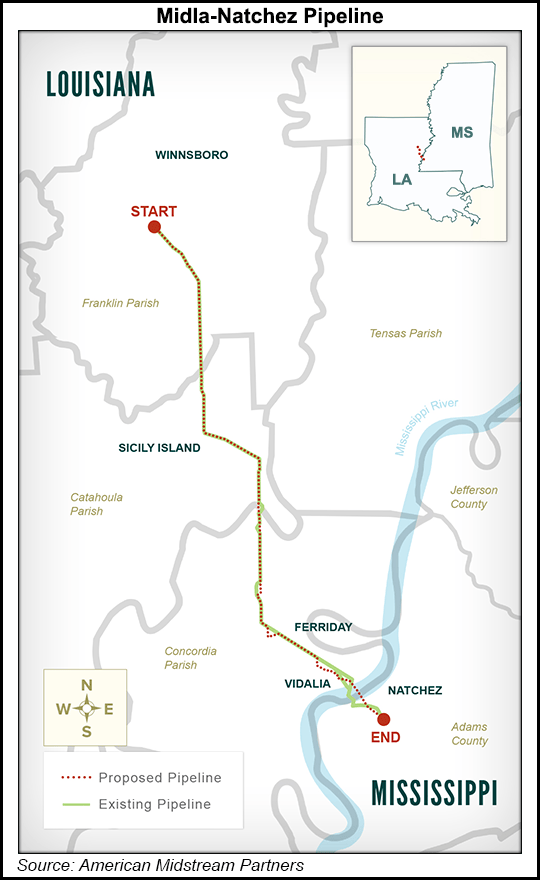 The project [CP15-523] included construction of a 51.96-mile, 12-inch diameter pipeline originating near Winnsboro in Franklin Parish, LA. The pipeline then traverses Franklin, Catahoula and Concordia parishes in Louisiana, crosses under the Mississippi River and terminates in Adams County, MS, near Natchez. American Midstream also built a 0.5-mile, four-inch diameter lateral in Concordia Parish, located near milepost 46.81 of the mainline, to serve the city of Vidalia, LA.

The company previously reported that Atmos serves the cities of Ferriday, Gilbert and Wisner, LA, and the city of Natchez, MS. Meanwhile, LMGA serves the municipal gas systems of Clayton, Jonesville, Sicily Island and Vidalia, LA, and BASF has an industrial facility near Vidalia.

“This $60 million project was undertaken as a commitment to provide safe and reliable energy transportation service to our customers and to the communities we operate,” said American Midstream CEO Lynn Bourdon. “Additionally, this project will provide the ability to deliver new and incremental volumes to existing and future customers, developing a foundation for further growth in the region.

“With line fill underway, we are excited to commence service and begin deliveries to our customers in the near future.”

American Midstream said the project was financed with $60 million of 3.77% senior secured notes due in June 2031 that were issued by subsidiaries of the partnership last September, and are non-recourse to the partnership.

Debate over the fate of the antiquated Midla system began in earnest more than three years ago, in March 2014, after negotiations between American Midstream and its customers over repairs to the system foundered and there was no interest to an open season. The company subsequently began decommissioning Midla, triggering the wrath of several keylawmakersin Congress.

In September 2014, FERC agreed to American Midstream’s request for a rehearing over an application to abandon the Midla system. The next month, ArcLight Capital Partners, a Boston-based hedge fund that owns American Midstream, agreed to a preliminary deal to construct the pipeline.

A settlement [RP14-638] over the dispute was reached with several parties in December 2014, and American Midstream’s subsequent application to FERC went uncontested. An environmental assessment for the new pipeline was completed in November 2015. Under the settlement, FERC agreed to allow American Midstream to abandon the antiquated Midla system.

The 370-mile Midla system was built in 1926, traverses Louisiana and Mississippi, and was designed to move gas from the then-prolific Monroe Gas Field in Ouachita Parish, LA, to a Standard Oil (now ExxonMobil Corp.) refinery in Baton Rouge, LA. In the early to mid-1970s, the system carried up to 300 MMcf/d. The mainline consists of 16- to 22-inch diameter pipe.