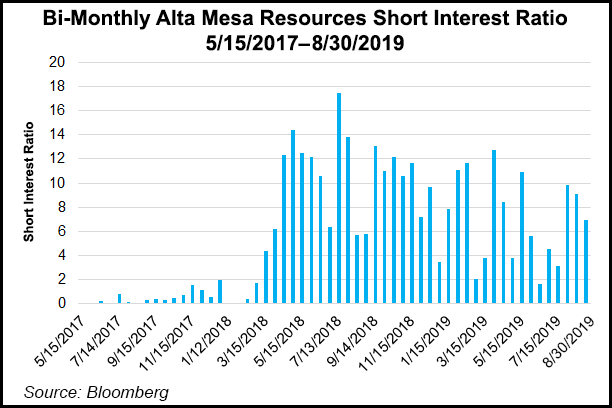 The Houston-based operator is developing the Sooner Trend of the Anadarko Basin, mostly in Canadian and Kingfisher counties, better known as the STACK.

“We believe that the Chapter 11 process provides the best pathway for Alta Mesa Resources and Alta Mesa Holdings to restructure their respective balance sheets and to regain the financial flexibility necessary to develop their large position in the STACK in a manner that will maximize value for all their stakeholders,” said Executive Chairman Jim Hackett.

Hackett, who led Anadarko Petroleum Corp. from 2004-2012, has chaired Alta Mesa since he led its takeover in 2017 and led the launch to become publicly traded last year. He stepped in as interim CEO earlier this year after the previous CEO, COO and CFO resigned.

The Securities and Exchange Commission in May said it was investigating Alta Mesa for possible financial reporting issues.

Even though Alta Mesa has made “considerable progress in reducing costs and improving well results, the companies continue to operate against a historically challenging commodity price environment,” management said.

The capital market also is “highly constrained for energy companies. Ultimately, these factors made bankruptcy protection the best option for the companies as they continue production operations while negotiating with their lenders.”

The board approved several leadership changes, including appointing a new CEO, to provide a “more optimal management structure” moving forward. Hackett would remain involved with the board and management team during the restructuring process.

Castiglione, Hackett said, “has demonstrated the skills required to lead this organization into the future, and he has the full support of the board. Mark has both a financial and technical background and has served in engineering and business development roles in several large- and medium-sized public and private independent oil and gas companies.”

Castiglione has been a partner at Meridian Energy LLC and previously was an adviser for MPC Resources LLC, as well as formerly for SandRidge Energy Inc.

In other management moves, interim President Randy Limbacher was named EVP of strategy and is to provide strategic counsel.

“When I assumed the interim chief executive officer role, I said that we would endeavor to find the right individual to lead the organization as it continues to progress forward with the development of our asset base,” Hackett said.