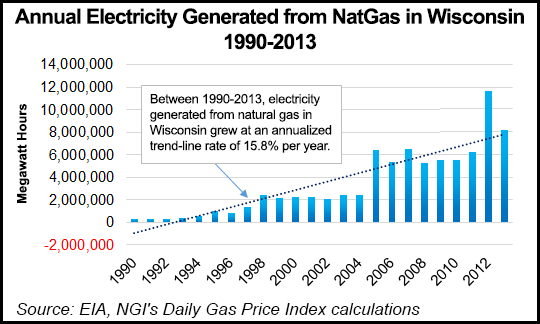 The proposed project, which was announced last fall, would replace about 700 MW of aging generation units that are scheduled for retirement in the next few years, the utility said. It would also include a solar energy installation that would help to power the facility’s operations.

“Integrating solar and natural-gas generation is a new technology application for us, and we are eager to use it as a research and learning tool, collaborating with local schools, colleges, the Electric Power Research Institute and industry partners,” said Alliant Energy President John Larsen. “The solar component will give us a chance to refine our understanding of utility-scale renewables.”

Assuming regulatory approval, the utility expects to begin construction in summer 2016 and complete the $750 million facility in early 2019. The project requires approvals from the PSCW and various federal, state and local governing bodies and regulatory agencies.

The Riverside Energy Center was owned and operated by Calpine Corp. — and sold the bulk of its output to Alliant’s Wisconsin Power and Light Co. — until the utility bought it for $400 million more than two years ago (see Daily GPI, Jan. 4, 2013).