A three-part study into the root cause of the well failure that resulted in the largest methane leak ever at the Aliso Canyon underground storage facility continues to move slowly on separate tracks and with little public attention. 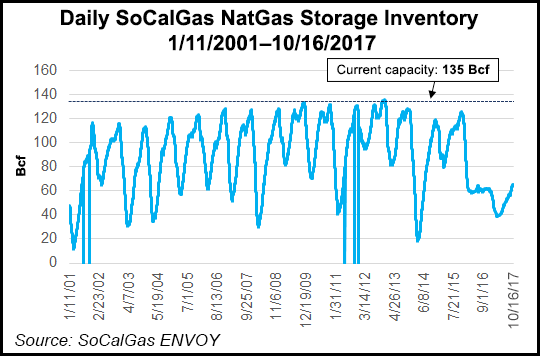 Since one of 114 storage wells at the 86 Bcf facility sprung a leak in October 2015, a root-cause analysis (RCA) investigation has been underway at the 3,600-acre site near Los Angeles, adjacent to the upscale Porter Ranch home development. A spokesperson with the California Division of Oil, Gas and Geothermal Resources (DOGGR) told NGI Monday that the report may be completed next spring.

Completing the RCA depends on three separate analyses ongoing simultaneously. A technical RCA is being done by Texas-based Blade Energy Partners, while the California Public Utilities Commission (CPUC) is assessing the issue, as well as the DOGGR.

After the Blade report is finished, “the CPUC and DOGGR analysis will be completed…as that technical information is critical to our respective reports. It is anticipated that the RCA report may be completed in the spring of 2018.”

As part of the third phase of the work, Blade in July began collecting evidence from the wellhead and tubulars in SS No. 25, the Aliso well that leaked. Two more phases then would need to be completed

Earlier this year, state officials told NGI that the RCA would be a five-phase process taking more than three years. The third phase by Blade may take up to nine months, and the fourth phase more than two months, before the final phase of “integration and interpretation” of the results.

Meanwhile, Porter Ranch primary care physician Jeffrey Nordella also released findings over the weekend on the health effects found in a sample of 106 patients who were exposed to excess methane emissions from Aliso. He presented his findings Saturday at a meeting of the Save Porter Ranch organization.

Nordella concluded from the patient sample that there is the need for a comprehensive, independent, long-term health study of toxic exposure from the well leak. He said residents continue to be sick from their exposure from four months of methane leaking at the site.

He found a “statistically significant difference” from the general population in levels of carcinogens, and urine samples showed elevated levels of styrene and ethylbenzene, while uranium and lithium were present in hair samples.