Canada’s chief natural gas supplier province is producing more but enjoying it less, according to government barometers of industry performance. 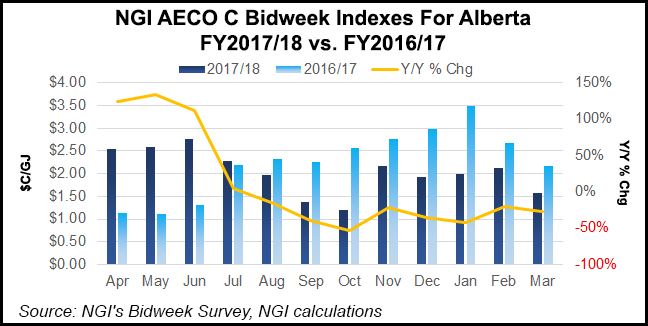 While Alberta’s production grew by 5%, its market value shrank by 6%, show records for the provincial treasury’s 2017-2018 fiscal year (FY), which ends this month.

The bare numbers fall short of registering the severe disappointment felt by the industry and the treasury. When Ceci presented the provincial budget a year ago, the ARP was forecast to climb by 45% to C$2.90/GJ ($2.44/MMBtu).

Although growing British Columbia (BC) gas production has reached 1.6 Tcf/year, Alberta still accounts for nearly three-quarters of the Canadian total. About half is exported to the United States for varying prices in markets across North America.

The pipeline network is responding with facilities additions, although at a gradual pace with projects securely supported by long-term transportation service contracts that require producer commitments often lasting a decade or more.

NGTL’s latest step is posting a preliminary project description for a package scheduled for completion in 2021, to increase capacity by 620 MMcf/d at grid inlets and 1 Bcf/d at outlets for C$2.4 billion ($1.9 billion).

In the meantime, three smaller facilities additions are under construction or advancing through regulatory approval stages before the National Energy Board.

Work is nearing completion on a central Alberta project called the Sundre Crossover, a short C$99 million ($80 million) stretch of pipe for a 233 MMcf gain in export delivery capacity to the U.S. Pacific Northwest and California.