A methane emissions cleanup drive has begun in Canada’s top oil and gas-producing jurisdiction, with the bills paid by levies imposed on companies that miss provincial carbon reduction targets. 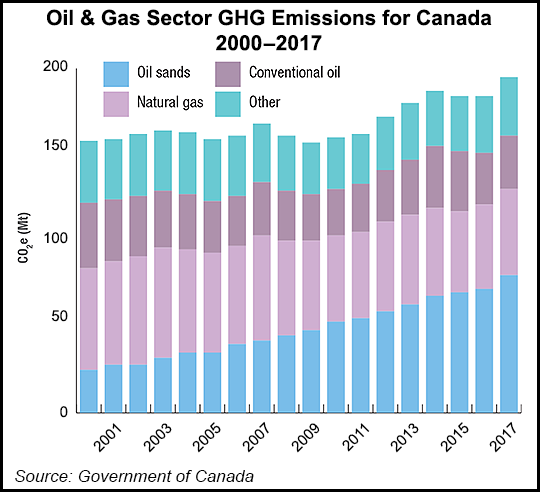 The Alberta government announced that the methane control campaign will use C$52 million ($39 million) from a banked waste carbon penalty fund called TIER, short for Technology Innovations and Emissions Reduction.

An ambitious cleanup target has been set: a cut of annual Alberta methane emissions equivalent to 1.5 million tons of carbon. On the greenhouse gas scale, methane rates as much as 25 times more potent as a cause of global climate change than carbon dioxide emitted from burning fossil fuels.

MTIP will distribute grants of up to C$1 million ($750,000), in amounts that match company spending on reducing methane emissions from oil and gas field hardware, storage tank vents and compressors.

“The government of Alberta has built a suite of programs supporting the three most critical components of methane mitigation: inventory, measurement, and deployment,” said Jackson Hegland, head of the industry’s Methane Emissions Leadership Alliance.

“MTIP and MEMP are an investment into the sustainability of the province’s oil and gas industry and will capitalize on domestic clean technologies today and into the future,” said Hegland.

The programs grew out of Alberta and federal government environmental policies that set a methane emissions reduction goal of 45%. The volumes involved remain debated by experts at detecting fugitive and dispersed leaks of the odorless, colorless gas.

The methane cleanup drive is part of an Alberta government pledge to tap banked TIER emissions penalties for a C$750 million ($562 million) array of environmental technology and performance improvement programs.

Spinoffs of fossil fuel industry cleanup campaigns include seeds of an export niche in the United States for Alberta environmental services enterprises.

Programs such as TIER and the U.S. American Carbon Registry enable environmental specialty firms to translate emission reductions into credits for sale to industry, as offsets needed to comply with greenhouse gas regulations. “People should be rewarded for sustainable initiatives at this scale,” said Radicle executive Rori Cowan.