A second court battle broke out Wednesday between the British Columbia (BC) and Alberta governments over the C$9 billion ($6.8 billion) Trans Mountain Pipeline expansion proposal for oil exports from the Pacific coast. 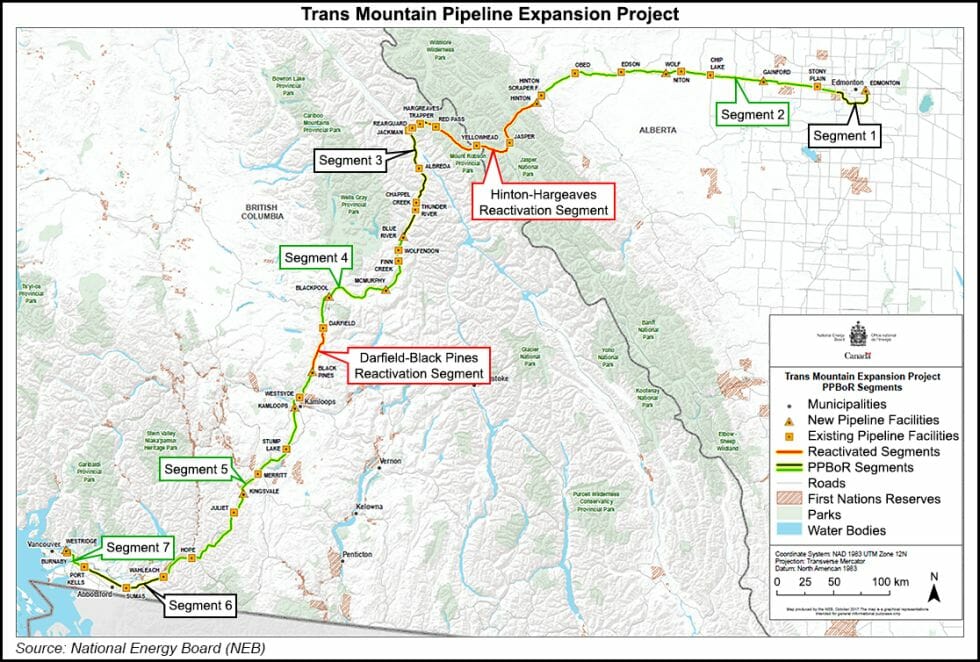 BC filed in the Alberta Court of Queen’s Bench for an injunction to prevent Alberta from cutting current deliveries on Trans Mountain as retaliation against environmental and native opposition that stalled the plan to triple capacity to 890,000 b/d.

A ruling has also been awaited from the BC Court of Appeal since oral arguments concluded in March on an earlier legal duel between the two provincial governments over rival claims to control the Trans Mountain oil traffic.

The first case centers on a claim by BC’s New Democratic Party (NDP) government to have authority to block increases in oil flows to the Pacific coast for tanker exports on the Trans Mountain expansion facilities, as an environmental protection measure.

The second case arises from a decision by Alberta’s new United Conservative Party (UCP) government to proclaim in force legislation that enables cuts to current oil traffic into BC with a restrictive delivery licensing system.

Alberta’s previous NDP government enacted the oil boycott bill but did not proclaim it into legal force. The UCP’s inaugural cabinet, appointed this week, did the proclamation formality but refrained from using the power, leaving cuts to BC supplies as a last resort in the Alberta pipeline conflict arsenal.

Both cases revolve around gray areas in the Canadian constitutional division of powers between the provincial and federal governments.

BC claims authority to control bitumen flows through a federally approved and regulated, long-distance pipeline in the name of environmental protection as a shared duty for Canada’s national and provincial governments.

No dates are set for rulings in the cases. Both could be appealed to the Supreme Court of Canada. Yet another court case is liable to challenge federal cabinet approval of the Trans Mountain expansion, scheduled for June 18. Political talks on the project are also underway between Alberta Premier Jason Kenney, BC Premier John Horgan and Liberal Prime Minister Justin Trudeau.