Age appears to be catching up to North America’s natural gas transmission infrastructure, and ongoing efforts to conduct safety inspections on older pipelines could have major market implications going into the winter. 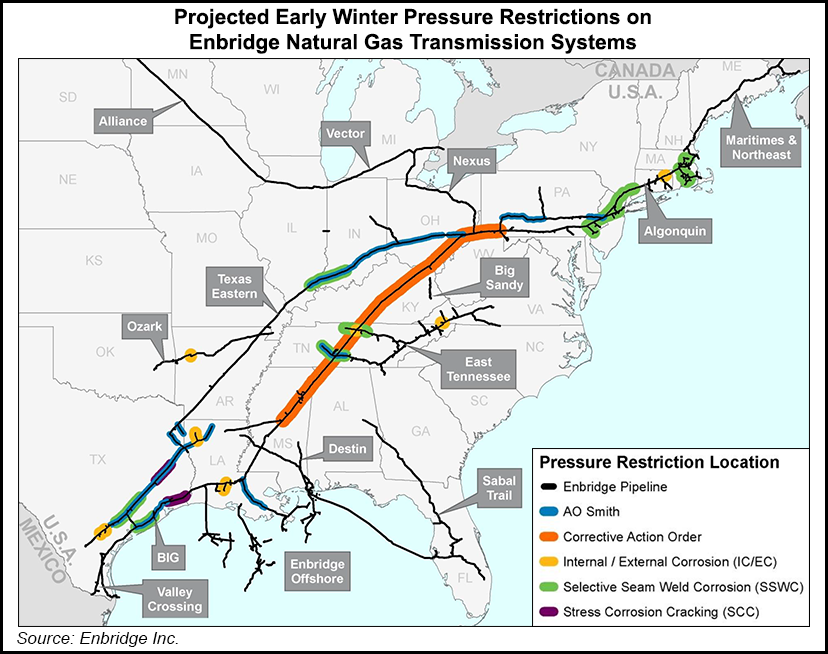 That’s according to a new research report from analytics firm Genscape Inc., which has been closely following Enbridge Inc.’s efforts to ensure the integrity of its lines in the wake of explosions on the Texas Eastern Transmission (Tetco), Westcoast Energy and East Tennessee Natural Gas pipeline systems going back to last year.

In a presentation for customers last month, Enbridge linked a fatal Aug. 1 explosion on Tetco’s Line 15 in Lincoln County, KY, to pipe manufactured by the A.O. Smith Corporation (AOS) between 1952 and 1957. The operator cautioned that the exact cause of the failure had yet to be determined but noted that “efforts are underway to assess all segments of Line 15 that have pipe manufactured by A.O. Smith of similar vintage and type to the pipe involved in the failure.”

Enbridge added that “the recent incident in Kentucky has given us cause to reevaluate additional threats associated with A.O. Smith pipe, specifically manufacturing defects including long seam weld fusion and hard spots.”

According to Genscape, the concerns over the AOS pipe are a factor of the age of the hardware.

“Though AOS pipe was once considered the gold standard for pipeline hardware, many systems in North America are running AOS pipe to its age limits,” Genscape said. “Recent notable market-disruptive pipe failures are forcing pipelines to make tough assessments of the state of their infrastructure.

“Such assessments will lead to flow disruptions starting soon, lasting well into the winter strip, and potentially beyond.”

Notably, Tetco and Algonquin Gas Transmission (AGT) could both see impactful restrictions during the upcoming winter, according to Genscape.

On Tetco, a series of maintenance events in its Market Zone 3 (M-3) could curtail flows along the Penn-Jersey Line.

“The biggest capacity restriction is at the start of M-3 at Delmont, where winter capacity will be reduced to 2.16 Bcf/d,” Genscape said. “Flows through the Penn-Jersey Line far surpass that level in the winter, with last winter’s peak flows reaching 2.93 Bcf/d on Feb. 1, 2019, which implies a max curtailment of around 770 MMcf/d.”

On AGT, a system already prone to congestion during the winter, ongoing maintenance on the 26-inch Mainline between the Southeast and Cromwell compressor stations could extend into November, potentially leading to a max curtailment of 496 MMcf/d through Cromwell, CT, according to the firm.

AGT has also outlined plans for “early winter proactive pressure restrictions” to conduct investigations of pipe on its system, which will allow for inspections of pipeline segments “either manufactured by AOS or susceptible to similar types of corrosion even if they are not manufactured by AOS,” Genscape said.

“These pressure restrictions will result in small capacity reductions of 40 MMcf/d throughout the mainline and G System,” Genscape said. Capacity through Burrillville, RI, could see a cut of 71 MMcf/d compared to last winter’s capacity but “since these are early winter restrictions, it is unclear if Burrillville will reach this winter’s peak capacity before these restrictions are lifted.”

The CER authorized compressor upgrades and a 15% capacity increase to 1.5 Bcf/d as requested to improve the 1,040-kilometer (650-mile) pipeline’s reliability and cater to increased provincial gas traffic.Recommendations for more improvements may emerge from an unfinished inquiry into a rupture and explosion last October on a northern leg of Westcoast near Prince George, BC.

Asked about efforts to inspect aging pipe on its systems, Enbridge spokesperson Michael Barnes said the company’s engaged in an “ongoing integrity program” to “conduct comprehensive assessments of our pipelines.”

“Safety is at the forefront of everything we do as a company,” Barnes said. “Our dedication to continuously improve our operational safety practices stems from our relentless focus on protecting the people within the communities where we operate, our employees, and the environment.”

Enbridge’s integrity program comes as a new rule from the Pipeline and Hazardous Materials Safety Administration (PHMSA), published in the Federal Register this week, will require operators to verify the integrity of “grandfathered” pipelines built before 1970 that were previously exempted from certain testing requirements.

With the rule published, Genscape said it expects to see “additional disclosures from major transmission pipelines” regarding any testing or remediation efforts, “though these may come in the form of heavily populated maintenance calendars instead of neatly bundled presentations.”

“The useful life of a pipeline is a factor of wear and tear that comes from normal existence and use,” Genscape said. But even setting aside the normal aging process, the “manufacturing, welding and installation methods for all pipe installed prior to 1970 are suspect, as widespread techniques used at the time (not just by AOS) have been proven to contain or introduce latent defects into the finished pipe.”

What’s more “progress is slow” for maintenance and replacement programs for at-risk pipe, according to the firm.

“At the current rate of replacement, 27% of currently existing pre-1970 pipe will celebrate over 100 years of service in 2070,” Genscape said.