As the recent discovery of the Covid-19 Omicron variant has renewed concerns about a potential decline in consumption, Brent crude oil spot prices are set to average $71/bbl in December and $73 through the first quarter of 2022, according to updated projections from the Energy Information Administration (EIA). 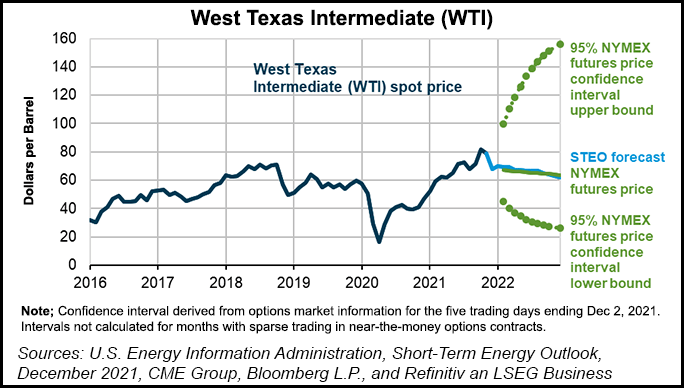 In an updated forecast published Tuesday as part of the December edition of the EIA’s Short-Term Energy Outlook, the agency predicted an average Brent spot price of $70 for 2022 overall.

The updated near-term Brent forecast represents a notable softening of the price outlook from the previous month’s forecast, when EIA predicted an $82 average for Brent for 4Q2021.

Brent spot prices averaged $81 for November, a sequential decrease of $3 but up sharply from prior year levels, according to EIA. Still, news of Omicron drove significant price declines in late November as it “raised the possibility that petroleum demand could decline in the near term.”

EIA in the latest STEO cautioned that the emergence of Omicron “raises uncertainty about the level of energy consumption throughout the world” versus the prior month’s expectations.

The world consumed an estimated 99.7 million b/d of petroleum and liquid fuels last month, up 4.9 million b/d year/year but still 1.1 million b/d shy of 2019 levels for the month, according to EIA.

Meanwhile, natural gas bulls have taken it on the chin so far this winter, but Henry Hub spot prices remain on track to average $4.58/MMBtu from December through February, according to EIA.

The winter price prediction reflects a roughly $1 discount versus the prior month’s forecast, when the agency called for an average price of $5.51 for November through February.

Prices at the national benchmark averaged $5.05 in November, down sequentially from the $5.51 October average. Mild weather lowered heating demand and allowed stockpiles to narrow the deficit versus the five-year average during the month, even as strong global demand supported prices, the agency noted.