From the Arctic to the Sahara, Texas is expected to experience quite the swing in temperatures this year. A preliminary summer forecast issued by WeatherBell Analytics LLC is projecting a hot summer centered in the Lone Star State. 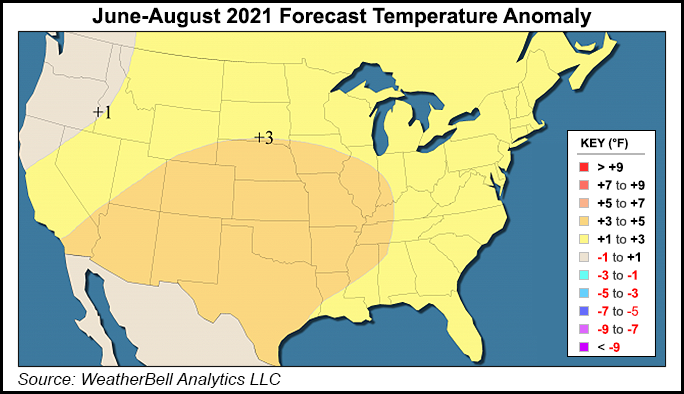 “Our summer outlook calls for above-normal temperatures for most of North America,” said chief forecaster Joe Bastardi. “The area most likely to be warmest is centered in the Southwest and Texas.”

Bastardi said it wouldn’t be surprising to see a near 5-degree temperature departure above normal in the southern High Plains. Statistically, though, that would be improbable.

“I am not going to pull any punches — a near-record warm summer is our expectation,” Bastardi said.

WeatherBell is expecting the La Niña pattern to redevelop and be a second-year La Niña. “These have a habit of being quite hot,” according to Bastardi.

While European and Candian weather models reflect widespread warmth, they are “a bit bothersome,” Bastardi said, as they center the heat farther to the north.

The forecaster noted that this preliminary outlook is “the first shot out of the gate” with the June-August period, and it looks like a lot of widespread warmth. The argument may be where it is centered.

“At this time, I like Texas and the forecast reflects that,” Bastardi said. “Within the individual months, there will be some variability.”

For example, WeatherBell data shows that June 2011 recorded above-normal heating degree days, as rain-cooled air held on in some places across the United States.

Heat aside, hurricane activity also is to remain closely monitored this summer, more so because of the demand destruction it imposes rather than any potential disruptions to supply.

The National Hurricane Center (NHC) on Tuesday (March 2) said it would begin issuing routine tropical weather outlooks starting on May 15 in order to provide more frequent information on the potential for tropical cyclone formation ahead of the official June 1 start of the Atlantic hurricane season.

“Given recent increased tropical cyclone activity in the Atlantic basin in late May, routine issuance of the Atlantic Tropical Weather Outlook starting on May 15 offers a service improvement over unscheduled special” tropical outlooks that are issued to discuss the possibility of tropical cyclone formation prior to June 1, NHC said.

With the significant threats imposed by hurricanes on the electric grid in mind, the U.S. Government Accountability Office (GAO) recently examined the measures utilities in selected states have adopted to enhance grid resilience following major hurricanes since 2012 as well as any challenges utilities face funding such measures.

The GAO also looked at federal efforts to support the adoption of measures to enhance grid resilience to hurricanes, and any opportunities that exist to improve these efforts.

The GAO found that since 2012, utilities have taken numerous steps to improve grid resilience to severe hurricanes, including the implementation of storm hardening measures to enable the grid to better withstand the effects of hurricanes and the adoption of technologies to enhance operational capacity and help quickly restore service following disruptions.

However, there have been challenges along the way for some utilities. Some have reported difficulties justifying grid resilience investments to obtain regulatory approval, while others have limited resources to pursue such enhancements.

GAO noted that various federal agencies can provide funding for efforts to enhance grid resilience to hurricanes, however, eligibility for most federal funding for grid resilience is limited to publicly owned utilities and state, tribal and local governments.

The Department of Energy (DOE) does not provide direct funding for grid resilience improvements, but it has efforts under way, according to GAO. Its National Laboratories provides technical assistance and promotes research and collaboration with utilities. DOE also has initiated preliminary efforts to develop tools for resilience planning, but it does not have a plan to guide these efforts.

“Without a plan to guide DOE efforts to develop tools for resilience planning, utilities may continue to face challenges justifying resilience investments,” GAO said. In addition, DOE lacks a formal mechanism to inform utilities about the efforts of its National Laboratories. Such a mechanism would help utilities leverage existing resources for improving grid resilience to hurricanes.”