The stalled Atlantic Coast Pipeline LLC (ACP) has officially petitioned the nation’s highest court in an effort to uphold its plans to cross the Appalachian National Scenic Trail, with the project’s schedule likely hanging in the balance. 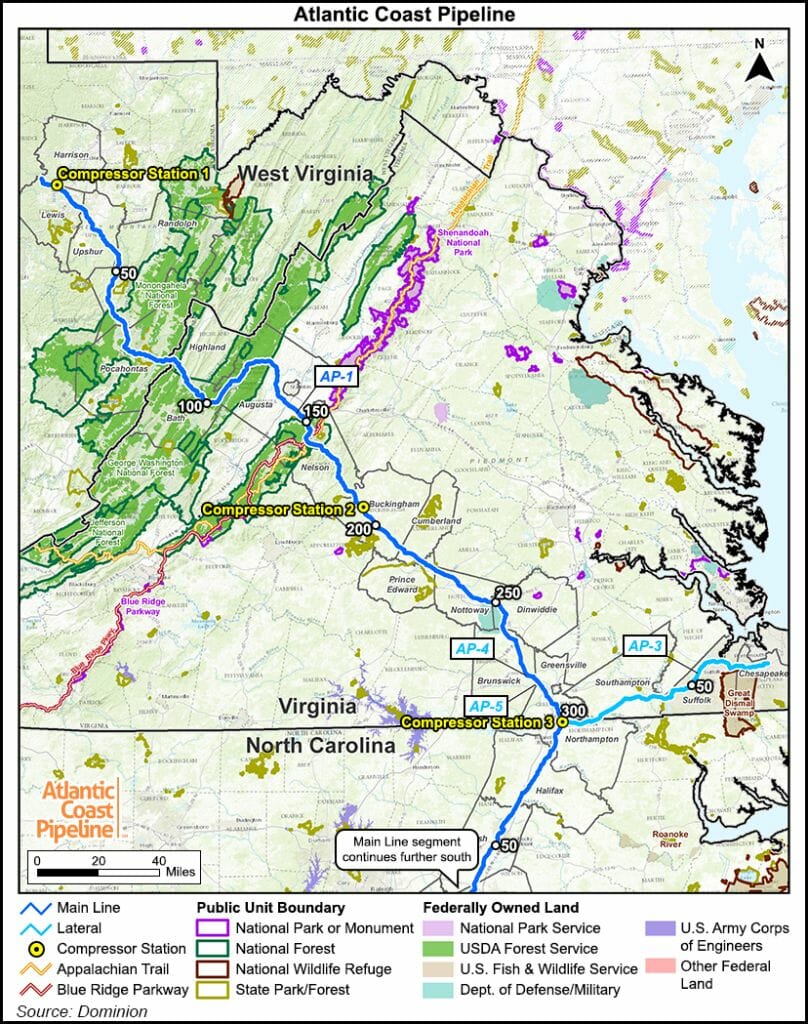 ACP’s sponsors had telegraphed their plans to seek the U.S. Supreme Court’s judgment as they look to overturn a decision in December by the U.S. Court of Appeals for the Fourth Circuit decision, which tossed out a critical U.S. Forest Service (USFS) sign-off.

That USFS approval is a prerequisite for the 1.5 Bcf/d, 600-mile natural gas pipeline to cross through national forests and the Appalachian Trail on its mountainous path from West Virginia into Virginia and North Carolina.

At the heart of ACP’s challenge is whether the USFS has authority under the Mineral Leasing Act to grant a right-of-way for the pipeline’s 0.1-mile underground crossing of the Appalachian Trail. The Fourth Circuit’s decision could have implications for other infrastructure projects routed across the trail, including the proposed Mountain Valley Pipeline.

In a Petition for Writ of Certiorari filed with the Supreme Court on Tuesday, ACP counsel Paul D. Clement of Kirkland & Ellis LLP argued that the Fourth Circuit’s decision would effectively make the trail a barrier to new infrastructure projects in the region.

“While more than 50 pipelines presently cross under that footpath pursuant to similar rights-of-way, the Fourth Circuit concluded…that the Forest Service — indeed, every federal agency — lacks the power to grant rights-of-way to cross beneath the Trail” under the Mineral Leasing Act, “rendering the footpath a 2,200-mile barrier separating resource-rich areas to its west from consumers to its east.”

Clement took issue with the Fourth Circuit’s interpretation of the various federal, state and privately controlled lands under the Appalachian Trail as part of the National Park System and thus not subject to rights-of-way under the Mineral Leasing Act.

“In doing so, the court not only rejected the federal government’s long-settled views, but has called into question dozens of existing rights-of-way under the Trail and upset” the “massive investments” made in ACP, Clement wrote.

The U.S. Solicitor General, representing the USFS, has also filed a petition with the Supreme Court to overturn the Fourth Circuit’s decision, arguing that the court “misread the National Trails System Act” in its ruling.

ACP spokesman Aaron Ruby told NGI Wednesday that the company believes the Fourth Circuit’s decision is “exceptionally wrong” and expressed confidence that the high court will hear the case and rule in the project’s favor.

“This is a case of national importance, and its impact extends far beyond the Atlantic Coast Pipeline,” Ruby said. “…The facts are on our side, and so are the law and decades of precedent. Every agency involved in this case agrees that the Forest Service has the authority to approve our crossing of the Appalachian Trail. The Solicitor General’s petition strengthens our case and also significantly increases the likelihood that the Court will hear it.

“For decades, more than 200 other pipelines and electric transmission lines have been permitted to cross the Appalachian Trail. They have done so without disturbing its public use or enjoyment. The Atlantic Coast Pipeline will be no different.”

From here, Ruby said the company expects the Supreme Court to decide on ACP’s petition by this fall, which would in turn lead to oral arguments next spring and a final decision by next summer. Under that timeline, ACP could achieve partial in-service by late 2020 and full in-service by 2021, he said.

Environmental groups, which have been relentless, and to some extent successful, in their efforts to challenge and delay ACP, are seeking to uphold the Fourth Circuit’s decision. In a June 24 letter to USFS officials, attorney Austin D.J. Gerken with the Southern Environmental Law Center argued, among other things, that “reasonable off-forest alternatives exist for ACP” to cross the trail and that the Fourth Circuit’s decision does not unsettle established precedent.

“The Mineral Leasing Act applies only to the initial grant of a right-of-way or the renewal of temporary rights-of-way for oil and gas pipelines.” Permanent rights-of-way granted before the trail was established as part of the National Park System aren’t impacted by the Fourth Circuit’s decision, Gerken argued.