Energy free trade with Canada enabled U.S. natural gas exporters to make sales worth C$51.4 billion ($41 billion) since the onset of high-volume unconventional production a decade ago, according to the federal government in Ottawa. 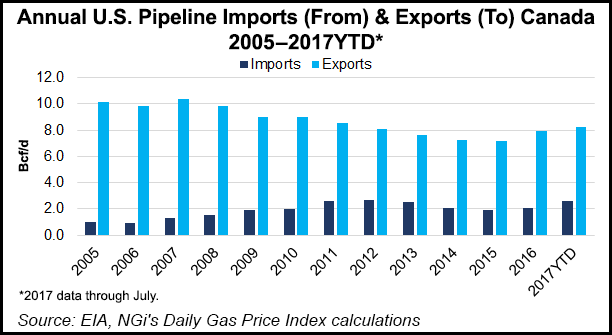 In the old era of conventional production from naturally flowing reserves, northbound cross-border gas took until 2003 to top C$1 billion ($800 million) for the first time, said a scorecard kept by Statistics Canada.

Accelerating output from horizontal drilling and hydraulic fracturing in the United States lifted exports to Canada above C$4 billion ($3.2 billion) in 2007. Northbound cross-border sales averaged C$4.9 billion ($3.9 billion) over the past 10 years. The peak annual performance to date was C$6.8 billion ($5.4 billion) in 2014.

Canadian gas merchants continued to own their historical majority of the trade but their dominant role shrank as U.S. shale production pushed them out of domestic markets then flowed north into Ontario and Quebec.

The Canadian gas export revenue record was set at C$38.3 billion ($30.6 billion) in 2005, when hurricanes wounded Gulf of Mexico production and inflated prices.

In the shale era, Canadian exports only approached regaining their peak once by touching C$35.9 billion ($28.7 billion) in the 2008 early going for the new technology of gas abundance. At their 2005 peak, Canadian gas exports were 10 times the value of northbound U.S. cross-border sales, which fetched C$3.9 billion ($3.1 billion) for the year.

The National Energy Board (NEB) called attention to the Statistics Canada trade record in a “market snapshot” of emerging trends. Highlighting the value of cross-border commerce has become a Canadian priority since President Trump started renegotiating the North American Free Trade Agreement, and suggested replacing it with separate pacts with Canada and Mexico.

The NEB review suggests a reason why energy has had a low profile in the negotiations to date compared to other sectors such as lumber, dairy products and manufacturing. The United States is gaining in energy trade with Canada, according to NEB’s summaries of Statistics Canada records that detail performance by all items for three-month quarters of the years.

On the Canadian side of the trade ledgers, “Natural gas’s share of imports, by dollar value, increased from 3% of the total imports in 1987 to 14% in 2017. This increase corresponds with increased gas production in the U.S. which resulted in more imports into Ontario and Quebec.”

U.S. oil exports to Canada have also grown at a brisk pace, thanks partly to refinery closures in Ontario, Quebec and Nova Scotia that have thrown their markets wide open to U.S. merchants.

Refined petroleum products’ share of Canadian energy imports, by dollar value,”increased from 9% in 1987 to 26% in 2017, with the growth primarily in the last 15 years. This corresponds with closures of several refineries,” the NEB said.

Evidence emerging in a Maritimes & Northeast Pipeline (M&NP) toll case, currently before the board, continues to confirm that U.S. gas exporters are poised to gain the Canadian Atlantic coast markets in New Brunswick and Nova Scotia.

Nova Scotia and New Brunswick consume about 62 Bcf/year of gas. Their supplier since 1999, the Sable Offshore Energy Project (SOEP), will dry up in about three years, the toll case and the NEB’s latest Canadian market forecast indicated.