Four major hurricanes are forecast to storm through the Atlantic Basin this year, with at least one likely making landfall on the U.S. coastline, according to meteorologists at Colorado State University (CSU). 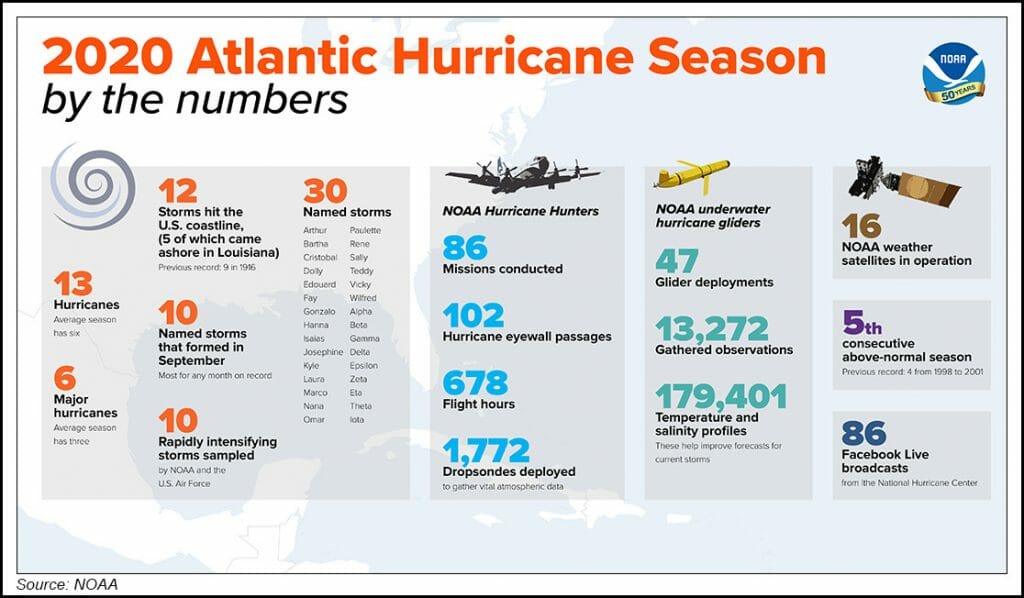 “The probability of U.S. major hurricane landfall is estimated to be about 130% of the long-period average.”

For the entire continental U.S. coastline, the probability of a major hurricane, falling into Category (Cat) 3-4-5, is 69%. The Atlantic hurricane season officially runs from June 1 through Nov. 30.

In addition, the probability for at least one major hurricane tracking into the Caribbean is 58% versus the century average of 42%.

While the Gulf Coast since the advent of unconventional drilling no longer accounts for most U.S. oil and gas production, its resources are significant. In addition, the U.S refining and petrochemical complex, as well as liquefied natural gas and oil exports, are centered on the coasts of Texas and Louisiana.

The Energy Information Administration (EIA) in March said U.S. oil production in 2020 dropped 8% year/year, in part because of the decline in demand from the pandemic. However, it also fell because of the record hurricane season.

EIA said the biggest crude production decrease last year developed in the federal waters of the Gulf of Mexico, where production dropped by 245,000 b/d year/year to an annual average of 1.65 million b/d in 2020.

The National Oceanic and Atmospheric Administration (NOAA) said the Atlantic hurricane season had 30 named storms last year, with 12 that made landfall in the continental United States. NOAA plans to issue its initial seasonal outlook for the 2021 hurricane season in late May.

The Atlantic Basin could see about eight hurricanes this year, up from the average of 6.4, according to CSU. Seventeen named storms are predicted, compared with the seasonal average of 12. Eighty named storm days also are expected, versus the average of about 59.

“Information obtained through March 2021 indicates that the 2021 Atlantic hurricane season will have activity above the 1981-2010 average,” the CSU forecasters said. “The tropical Atlantic currently has near average sea surface temperatures, while most of the subtropical Atlantic is warmer than normal.”

Meanwhile, the Climate Prediction Center of NOAA said Friday it plans to use 1991-2020 as the new 30-year period of record.

“This update allows our meteorologists to make forecasts for the hurricane season with the most relevant climate statistics taken into consideration,” said NOAA’s Michael Farrar, director of the National Centers for Environmental Prediction..

The update “reflects a very busy period over the last 30 years, which includes many years of a positive Atlantic Multi-decadal Oscillation, which can increase Atlantic hurricane activity.”CPC seasonal hurricane forecaster Matt Rosencrans said the updated averages “better reflect our collective experience of the past 10 years, which included some very active hurricane seasons. NOAA scientists have evaluated the impacts of climate change on tropical cyclones and determined that it can influence storm intensity.”