The upcoming Atlantic hurricane season is likely to be the fifth consecutive with above-average activity, producing 14-18 tropical storms, including seven to nine hurricanes, with two to four of them major hurricanes (Category 3 or higher), according to AccuWeather meteorologists. 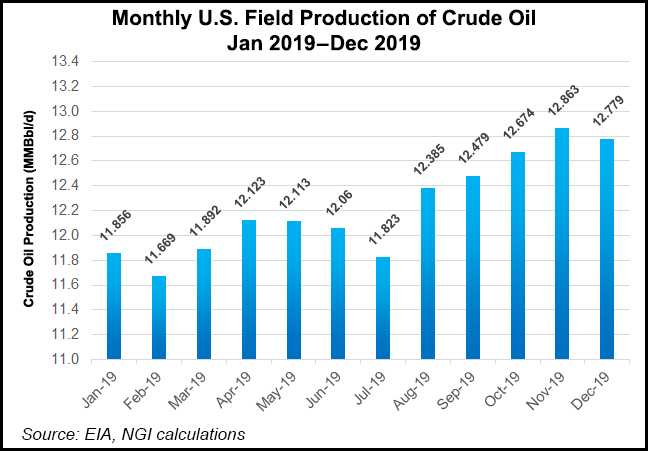 The 2019 Atlantic hurricane season was tied with 1969 as the fourth most-active hurricane season on record with 18 named storms. Oil and natural gas-impacting storms during the year included Hurricane Barry in July, and Hurricane Dorian and Tropical Storm Imelda in September. Barry took a 276,000 b/d bite out of U.S. crude oil production in July, the largest decline in monthly production in more than a decade.

Forecasters will be keeping a watchful eye on parts of the Caribbean Sea and areas east of the Bahamas, where water temperatures have already hit 80 degrees F, said AccuWeather senior meteorologist Dan Kottlowski.

“Warm water is actually what drives a lot of seasons,” Kottlowski said. “So those will be areas to keep an eye on for early-season development.”

Since President Trump took office, the Interior Department has tried opening more of the offshore by pursuing a strategy of offering every available unleased area in the Gulf of Mexico (GOM). But the area-wide auctions, which reversed years of leasing in specific targeted regions, have to date drawn limited interest from operators.

Oil and natural gas prospects in the GOM drew bids from 22 operators in a federal lease sale last week, but whether it was the coronavirus or slumping oil prices, interest was not strong in the sixth sale under the 2017-2022 Outer Continental Shelf Oil and Gas Leasing Program as it has been in recent years.

The California Public Utilities Commission (CPUC) has proposed regulations to strengthen oversight of the state’s investor-owned utilities. The proposal, which would need to be approved by CPUC commissioners, would establish specific metrics to evaluate Pacific Gas and Electric Co. (PG&E) operational safety performance. It would also adopt 10 safety performance metrics, building on those previously…