Permian Basin producers have to reduce natural gas flaring rates below 2% by the first half of 2021 when more pipeline infrastructure is due to come online or investors may shun them altogether, according to Pioneer Natural Resources Co. CEO Scott Sheffield. 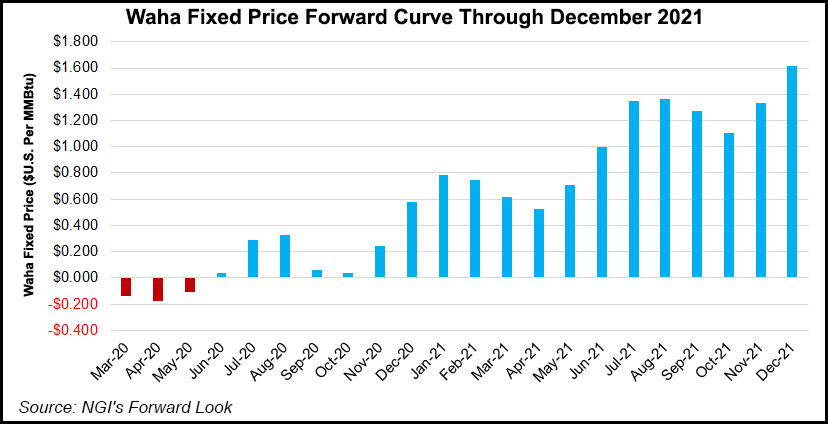 Sheffield, during a fourth quarter conference call, urged Permian exploration and production (E&P) companies to work toward eliminating gas flaring and venting as high emissions are destroying value and may lead shareholders and potential investors to “end up either not doing business or sell…”

The CEO in November called for E&Ps to limit flaring or suffer the consequences. Rates now run around 5% of production.

During the call, Sheffield noted that the flaring issue has to be discussed openly as it is drawing national attention. He shared insight into an invitation-only workshop on flaring held last month in Austin, TX, that brought together representatives of E&Ps, midstream operators, policymakers and academia. Columbia University and the University of Texas at Austin coordinated the workshop, in which operators agreed to share best practices and set flaring targets.

“We’d like to get all producers committed to this,” Sheffield said. The workshop led operators to commit to “better reporting to all agencies, both in the state of Texas and New Mexico…”

Investors “could end up either not doing business” with operators or “selling whatever they have,” Sheffield said.

From January 2018 through last July, Pioneer limited its Permian flaring to less than 2% of its produced gas. Proactive measures to reduce flaring include monitoring 100% of the Permian facilities aerially for leak detection and repair, and only producing a well once it is fully connected to a gasline.

Meanwhile, Sheffield said during 2019, the Permian Midland sub-basin operator performed above expectations, and “we expect 2020 to be even better.” Pioneer’s founding CEO initially served from 1997-2016 and then took the helm again last year, when he set out specific initiatives to return the Dallas independent to “top performance.” Those objectives have been reached as a “one basin company,” he told investors.

“We organized and flattened the reporting structure, which had the intentional benefit of riding greater transparency and visibility across all levels, resulting in a company highly focused on strong execution and capital discipline.”

Sheffield also claimed he was correct about another “milestone” that he’s been talking about for several months. The Energy Information Administration predicted in the February Drilling Productivity Report that for the first time in three years, March will see a reduction in Lower 48 natural gas production from the seven most prolific U.S. plays, while onshore oil production is forecast to remain flat. Only the Permian looks to build more oil inventory.

“All shale basins are now in decline except for the Permian,” Sheffield said, noting he had been estimating growth in the Permian of “roughly about 500,000 b/d…over the last several months.”

During the quarter 77 wells were placed online. Drilling and completions efficiencies increased by more than 30% from 2017 to 1,600 completed feet/day. The efficiencies were coupled with about 30% lower well costs.

Wells placed on production this year are expected to be divided by formations with 40% Wolfcamp B, 40% Wolfcamp A, 15% Spraberry and 5% other formations, with an average lateral length of 9,800 feet.

The company’s gas price realizations benefited from firm transportation to the higher-priced West Coast and Gulf Coast markets, compared to selling gas into the oversupplied Waha hub, he said.

Pioneer’s realized gas price in 4Q2019 was $2.21/Mcf, compared to the average Waha price of $1.11. The operator expects to have “minimal exposure” to the Waha hub going forward.

Pioneer is moving about 22,000 b/d of oil to the Gulf Coast and over time it expects to deliver more than 300,000 b/d, which over the long term “will be advantageous for getting into higher price markets where we can get Brent pricing,” Sheffield said.

Today the spread between West Texas Intermediate and Brent oil prices are “kind of a neutral breakeven proposition,” but over time, “it still is advantageous to get the higher price markets, so, I don’t think we’re going to change that strategy…We are making sure that we’re available in there to benefit when we see price spikes in the future.”

This year’s drilling, completions and facilities capital expenditures are set at $3-3.3 billion, with another $125 million budgeted for water infrastructure. The capital program is expected to be “fully funded” within forecasted cash flow of about $3.9 billion.

Going forward, Pioneer plans to “continue to focus on the things we’ve been focused on, primarily looking at the efficiency side, lean manufacturing…and being relentless…and trying to understand better, more effective ways to go about that,” Sheffield said.

“We’re trying to make our practices consistent all across the field, taking kind of the Southwest Airlines methodology, where any pilot can fly any plane, and having consistency across all of our drilling rigs and frack fleets…A combination of all those efforts leads me to believe we still have several bites at the apple.”

The company also has increased its quarterly dividend to 55 cents/share, an 185% increase from dividends paid in 2019.