EQT Corp. said Thursday it has renegotiated its natural gas gathering agreement with an affiliate of Equitrans Midstream Corp. and relinquished part of its equity stake, which is expected to generate long-awaited savings of $535 million over a three-year period. 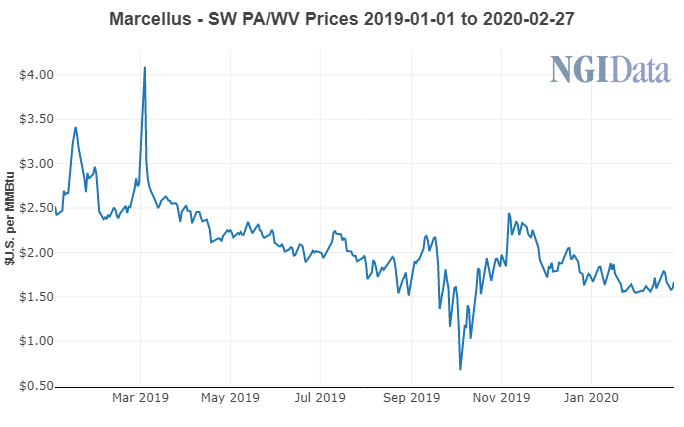 The reduction in gathering fees is forecast to begin next January, when EQT expects the long-delayed Mountain Valley Pipeline to enter service. The project was most recently targeted for a late 2020 start-up. Equitrans and affiliate EQM Midstream Partners LP were separated from EQT in 2018. They are EQT’s primary midstream providers.

Under the deal, nearly all of the company’s Pennsylvania and West Virginia acreage has been folded into a single consolidated agreement. EQT also increased its minimum volume commitments, dedicated more than 100,000 additional acres in West Virginia and extended its contractual obligations to 2035 with EQM. The producer also awarded EQM with a $60 million water services package for five years that begins when MVP enters service.

Under a new management team that took over last July after a proxy battle, EQT is aiming to aggressively cut debt and realign operations to boost performance and value. The nation’s largest gas producer said late last year that it would sell up to $1.5 billion in assets to help achieve those goals.

“EQT does not believe lower gas prices will impede its ability to execute multiple transactions,” management said in the company’s year-end results. “Transaction processes are progressing as planned, market interest is strong and EQT continues to target execution by mid-year 2020.”

CEO Toby Rice during a call to discuss earnings on Thursday said the company is marketing its assets in Ohio, which weren’t a mainstay of development before he took over. EQT has 60,000 core acres in the Utica Shale there. “We see strong interest in those assets,” he said. “We’re in the process right now of collecting feedback from potential parties there.”

The company has also pushed other initiatives advanced by Rice to enhance performance. Well costs in Pennsylvania’s Marcellus Shale averaged $800/foot in the fourth quarter, a 6% improvement from 3Q2019, putting EQT on track to hit a target of $730/foot by the second half of this year.

Since July, when Rice took the helm, top-hole drilling days have been reduced by 28%, while horizontal drilling speeds have improved by 38%, driving down total drilling days per well by 16%. Completion operations continue to see efficiency gains, with multiple pads averaging 15% more stages per day than internal forecasts.

“These efficiency gains, coupled with EQT’s transition from conventional fracture fleets to next generation electric fracture fleets, set the stage for EQT to not only incrementally improve operations, but to also significantly reduce its carbon footprint, improve safety in its operations and reduce the impact on the communities where it operates,” management said.

While the company has repositioned its hedge book to guard against the latest commodity downturn, refinanced near-term maturities to create more financial flexibility and again reduced its budget by up to $150 million to a range of $1.15-1.25 billion, its credit was recently downgraded.

“As commodity prices have declined, this has put pressure on ratings, the balance sheet and liquidity. We face a wall of maturities that we are addressing through the recent refinancing,” said CFO David Khani, who joined the company in January from Consol Energy Inc. “Our goal is to march back toward regaining our investment grade metrics, and we believe that we will achieve this through the EQM transaction, asset monetization and a modest recovery in natural gas prices.”

Average realized prices fell by 11% year/year to $2.69/Mcfe in 2019. The fourth quarter results also included a more than $1 billion impairment on its “long-lived” oil and gas assets.