Rover Pipeline LLC has filed at FERC for authorization to construct 711 miles of supply laterals and mainlines, as well as compression and other facilities, that would comprise its pipeline to carry Marcellus and Utica shale gas from West Virginia, Pennsylvania and Ohio to an interconnect with Vector Pipeline in Michigan. 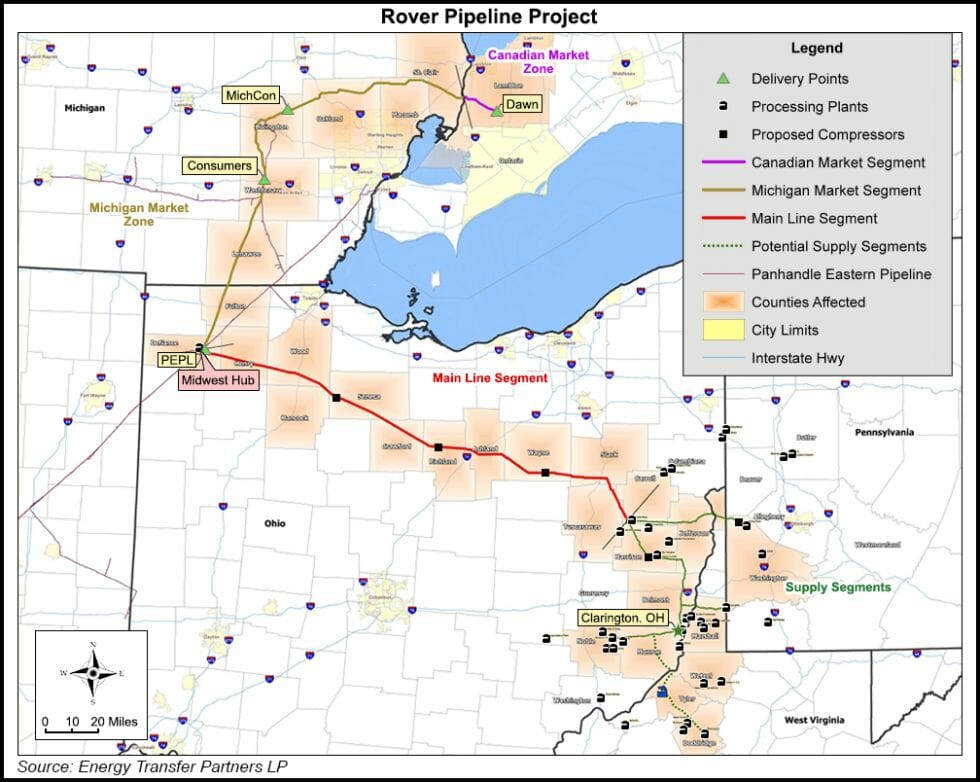 “The Rover Pipeline originated as a result of discussions with producers…that were seeking a means to move their stranded natural gas production to markets in the Midwest and Canada as expeditiously as possible,” Rover told the Federal Energy Regulatory Commission (FERC) [CP15-93]. “…Rover proposes to meet the long-haul transportation needs of these producer-shippers through a combination of new greenfield pipeline construction and the acquisition of existing off-system capacity.”

As designed, the $4.22 billion Rover would include dual 42-inch diameter pipelines from the beginning of its Mainlines A and B near the city of Leesville, in Carroll County, OH, to the Midwest Hub. Rover would have delivery meters at the Midwest Hub to deliver gas into Panhandle Eastern Pipe Line Co. LP and ANR Pipeline Co. Rover has executed precedent agreements with Panhandle and Trunkline Gas Co. LLC for firm capacity.

“By using existing capacity on the Panhandle and Trunkline Gas pipelines, Rover will deliver approximately 750,000 Dth/d to Panhandle, which will redeliver volumes via backhaul to Trunkline Gas’ Zone 1A,” the company said. “Rover will also be capable of delivering up to approximately 1.7 Bcf/day to ANR.”

From the Midwest Hub, Rover would be a single 42-inch diameter pipeline — the project’s Market Segment — with capacity to carry up to 1.3 Bcf/d to a proposed interconnection with the Vector system in Livingston County, MI.

“Rover has executed a joint precedent agreement with Vector and its interconnected affiliated pipeline, Vector Pipeline LP (Vector Canada), for up to 950,000 Dth/day of firm transportation capacity in order that Rover may provide transportation service to those producer-shippers in its Market Zone North requesting deliveries in Michigan under Rover’s Rate Schedules FTS and ITS, as well as deliveries to the Union Gas Dawn Hub in Ontario, Canada [see Daily GPI, Feb. 3],” the company told FERC. “Additionally, Rover has contracted with Panhandle to deliver additional volumes to the U.S./Canada International Boundary at the Union Ojibway interconnect for further redelivery to the Dawn Hub via the Union Gas Ltd. system.”

Rover told the Commission that producers accessing the Dawn Hub would have multiple options for their gas: several storage facilities; delivery into Canadian markets; delivery to U.S. Northeast markets via TransCanada Corp. pipelines; as well as local Michigan and Chicago markets accessed via other pipelines from Dawn.

Rover proposed beginning service on a portion of the supply laterals (the Seneca, Clarington, and Cadiz laterals) and the entirety of Mainlines A and B to the Midwest Hub by December 2016. The second construction phase, which entails facilities from the Midwest Hub to the interconnection with Vector, as well as the remaining supply laterals, is scheduled to be completed and placed in service by June 2017.

“Because an in-service date of December 2016 is critical to certain shipper commitments, Rover is requesting issuance of the certificate authorization as proposed herein by November 2015,” the pipeline told the Commission.