Mexico’s Energy Minister RocÃ­o Nahle has issued a powerful one-two punch to a couple of popular perceptions about the government’s policy on the oil and gas industry. 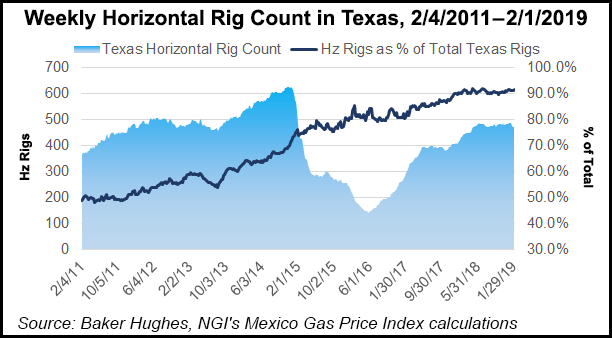 Nahle said late last month that the most critical problem of the energy sector is not necessarily the ongoing fuel theft crisis but instead the massive trade imbalance in natural gas.

That was punch one of the one-two that Nahle delivered. Punch two was somewhat of a blow to the ribs of those who have been assuming that the LÃ³pez Obrador administration was aiming to ban hydraulic fracturing (fracking) that could reveal what most experts consider to be a treasure trove of unconventional resources that abound mainly in northern Mexico.

Through his campaign and the early weeks of his administration, LÃ³pez Obrador certainly gave the impression that he was planning a ban on hydraulic fracturing, though he seldom, if ever, used the term “fracking.” When asked, he shied away from the word, preferring to say that Mexico would not be using “that technique.”

But during a visit to the northern Gulf state of Tamaulipas, he did back supporters of fracking, David Shields, editor and publisher of the EnergÃ­a a debate magazine told NGI’s Mexico GPI. “Tamaulipas is a hotbed of both crime and poverty. People know that just north of the U.S. border, shale can mean prosperity for many. Naturally, they are pro-fracking, and AMLO [LÃ³pez Obrador] told them what they wanted to hear.”

Shields’ view reflects that of many political observers, who claim that LÃ³pez Obrador confuses his long-standing role as a political candidate, promising favors to often-conflicting interest groups in exchange for their votes, with that of being a president who has to resolve a nation’s internal disputes.

Speaking at the Energy Mexico Oil Gas Power 2019 Expo and Congress, Nahle was careful to emphasize that she was not advocating a free-for-all on fracking. Strict conditions would have to apply, she said. These would include the use of the most modern and environmentally friendly versions of the practice, “and that would be expensive,” she said.

The minister also said that the government would insist on consultations with the communities where fracking is to be applied. Community consultations on energy projects were introduced in Mexico by the 2013 energy reform in an effort to match best international practices.

Indeed, such consultations form part of the “people’s democracy” policies that are being applied throughout the economy by the current left-leaning Mexican government.

Even so, Nahle emphasized, consultations can be costly, as they have in several cases where protests have caused prolonged delays in the construction of natural gas pipelines.

For example, she said, TransCanada Corp.’s Mexico unit, one of Mexico’s leading pipeline constructors, has been involved in long and very expensive delay on the key Tuxpan-Tula duct that forms part of a system to bring natural gas from southern Texas to the northern fringes of Mexico City.

Nahle’s clarifications on fracking were welcomed by Luis Miguel Labardini, partner of the Marcos y Asociados consultancy in Mexico City.

“There is no legislation on fracking, so talks of a ban were at best premature,” he told NGI’s Mexico GPI. “Fracking has been used for years in the Mexican oil industry,” he added. The state-owned PetrÃ³leos Mexicanos (Pemex) “will be using fracking for several wells in this year’s budget.”

Renaissance is entirely focused on Mexico, where it has conventional operations in the southeast and also further north in the Tampico-Misantla basin, where unconventional resources predominate.

Last year, Renaissance established close contacts with energy members of the transition team following the July elections, and beyond to those of the new government that emerged in December.

“We closely followed the debate on fracking,” Smith said, “but it was always based on verbal comments, and now we’re encouraged that the energy secretary has clarified the matter.

“We agree with her that the best practices need to be used to protect the environment, and that hydraulic stimulation policy has improved greatly. And costs are more than acceptable, they’re expected.”

Renaissance drilled 17 wells in the Chicontepec basin and one other deep test, of about 3,500 meters, where it is conducting laboratory testing on the cores to understand the commercial viability of the plays and get some new data on the Jurassic shales in the Tampico-Misantla region where their working partners are Russia’s Lukoil and PetrÃ³leos Mexicanos (Pemex).

“We have had a good dialogue with them and we’re agreed there are big production gains for Mexico in unconventional resources,” Smith said. “This is a critical juncture for Mexican energy. There’s a need for the introduction of modern drilling techniques that is going to attract significant foreign investment.”

In his daily press conference on Monday morning, LÃ³pez Obrador contradicted his energy minister, and said he would stick to his campaign pledge against fracking.