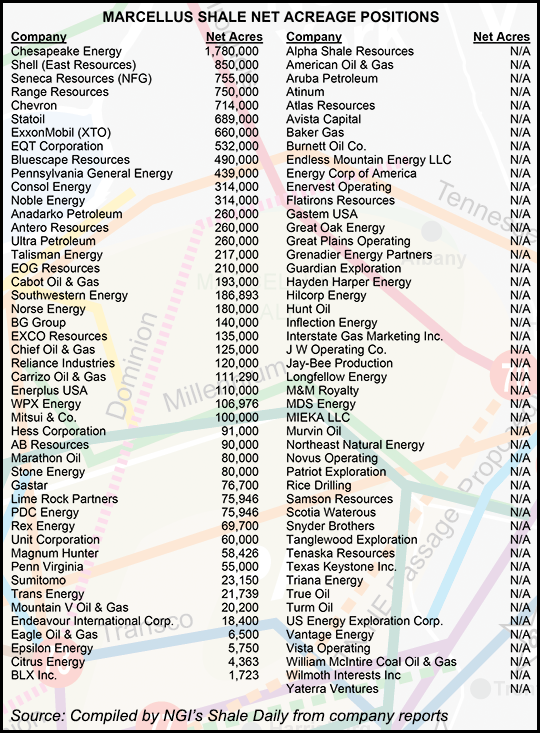 “The question now is what will be the next chapter in America’s shale success story?” XTO Energy President Jack Williams asked attendees of the Marcellus Shale Coalition’s Shale Gas Insight 2012 Conference in Philadelphia on Thursday. “It’s not a question of technologies; the technology for safe and responsible production of shale resources is already here. It’s whether our industry and government — and importantly, a willing public — will take the right steps to ensure our country remains the leader in the field, and so that our citizens’ communities can enjoy the full economic benefits of these ‘made in America’ energy technologies.”

Williams asserted that shale gas development is expected to support 1.5 million jobs and contribute nearly $200 billion to the national gross domestic product by 2015, figures that are expected to double by 2035.

“This is real economic opportunity for individuals, families and communities in Pennsylvania, Ohio, West Virginia, Texas, Colorado — every state with shale gas development. And even those without,” Williams said. “One out of every five jobs is located in a non-shale producing state.”

“The facts are undeniable,” Semple said, “Marcellus and Utica Shale development — along with many other unconventional resource plays in the United States — are creating hundreds of thousands of good-paying jobs and generating tens of billions of dollars in new government revenue. It’s also producing an energy resource that is clean and affordable, and making our nation more energy secure in the process.”

But Williams cautioned that for all of its success, the shale gas industry “must take steps to strengthen public confidence.”

“We need to acknowledge that for all the success of shale development, public confidence is not as strong as it could be,” Williams said. “Some Americans continue to demonstrate a high level of potential concern about the potential impact of shale development activity on their communities and the environment. This concern persists despite many independent studies affirming the safety of shale gas production, and despite the fact that shale oil and gas are produced every day across the country without significant incident.”

Williams cited the decision by XTO and other producers to disclose the chemicals used in fracking and listing them on the website fracfocus.org as one example of the industry trying to provide transparency. Other initiatives cited by Williams included industry helping draft guidelines for shale gas development, performing water quality testing near drilling sites, and efforts by three universities — Penn State, the Colorado School of Mines, and the University of Texas — to create shale gas training programs for state regulators and policy makers.

“This is not to say that there are no risks, or that more cannot be done,” Williams said. “Unfortunately, there continues to be a lot of misinformation out there. But I believe that with a commitment to public engagement and listening to communities’ concerns and questions, these issues will be resolved over time and public confidence in shale gas will continue to grow.”

“But there is an even bigger opportunity on the horizon for American-made LNG,” Williams said. “Just as we do with exports of grain, cars and other American products, by exporting LNG we could create economic value that otherwise would not have existed. Building these trade opportunities will also help provide a stronger foundation for the United States to promote free trade with potential partners around the world. And LNG exports would encourage increased domestic gas production, which in turn would put more investment in the United States and lead to the creation of more American jobs.”

Williams said ExxonMobil was “partnered with a cooperative venture that has applied to the DOE [U.S. Department of Energy] to explore the potential for exporting LNG,” from the Golden Pass LNG receiving terminal in Sabine Pass, TX, a project being developed by Cheniere Energy Inc. (see Shale Daily, April 19).

“If developed, this project would represent approximately $10 billion of investment, generating billions of dollars of economic growth at local, state and national levels, and millions of dollars in taxes to local, state and federal governments,” Williams said. “With LNG exports, we can use America’s abundant natural gas resources to take advantage of rising overseas gas demand, while still supporting expanded use of natural gas by American consumers and manufacturers.

“Exporting some of this North American bounty is not a question of either/or. We can do both.”

Semple hinted that the window of opportunity for the U.S. to export LNG may be a short one, a prospect that has not been lost on industry analysts and government regulators alike (see Shale Daily, Aug. 27; April 24). He cited statistics from the U.S. Geological Survey which said global technically recoverable shale gas totals approximately 6,600 Tcf, most of it in large basins outside the U.S.

“To date, shale gas development has been largely limited to North America,” Semple said. “That’s going to change over the next few years. Eager to replicate these enormous benefits, China, Australia and several European and South American countries are exploring for shale reserves.

“[But] developing these resources will require the use of American ingenuity, experience and technologies, reinforcing the fact that the United States is, and will remain, the catalyst for this global energy phenomenon for years to come.”