ExxonMobil Corp. subsidiary XTO Energy Inc. has filed a motion with a Pennsylvania court to dismiss multiple criminal charges against it, saying that it has been unfairly targeted by state Attorney General Kathleen Kane, who filed the charges last year (seeShale Daily, Sept. 12, 2013). 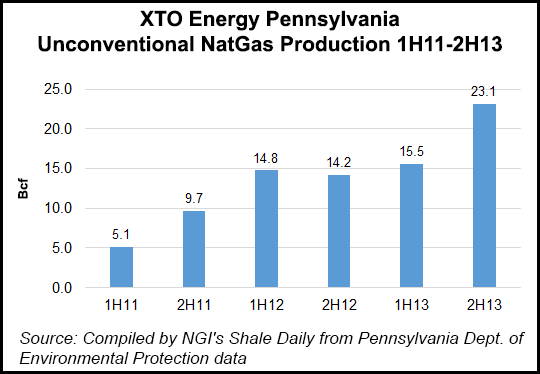 XTO’s filing is the latest volley in a high-profile case that represents the first time in which criminal charges have been filed in Pennsylvania against an unconventional oil and gas driller. In keeping with earlier arguments, XTO alleges that the state has failed to prove criminal charges are warranted, saying that Kane has waged a highly visible campaign to enforce an arbitrary “agenda to end hydrofracturing in Pennsylvania,” according to the filing.

XTO claims Kane has singled out the company with social media; an annual report that highlighted the company’s environmental violations; and by making good on comments she made during her campaign for the attorney general’s seat in 2012 that were slanted against the oil and gas industry. Kane’s office has declined to comment about the case. XTO has also asked a judge to release internal documents related to the state’s prosecution.

Those charges stem from a random inspection by the Pennsylvania Department of Environmental Protection (DEP) in November 2010 at a drilling site where XTO was working on two wells. The DEP found an open valve on a wastewater storage tank that discharged a large amount of fluid containing chlorides, barium, strontium and aluminum.

At issue in the case is how the valve was opened and who should be held responsible. XTO claims the incident was accidental, while Kane charges that the company should be held liable regardless.

Last December, sources from the oil and gas industry, including the Marcellus Shale Coalition and others who wished to remain anonymous at the time, told NGI’s Shale Daily that the case was attracting attention and they feared its repercussions could have a chilling effect on the industry in the state (see Shale Daily, Dec. 19, 2013).

XTO also said in its filing that similar environmental violations that have occurred in the state in recent years have not been given the prosecutorial weight that the 2010 incident has, even though the company agreed to a $100,000 penalty and a $20 million settlement with the federal government.