Xcel Energy Inc.’s Colorado combination utility on Tuesday filed with state regulators for approval to pursue a natural gas reserve program as one of a half-dozen initiatives under its “Our Energy Future” plan. 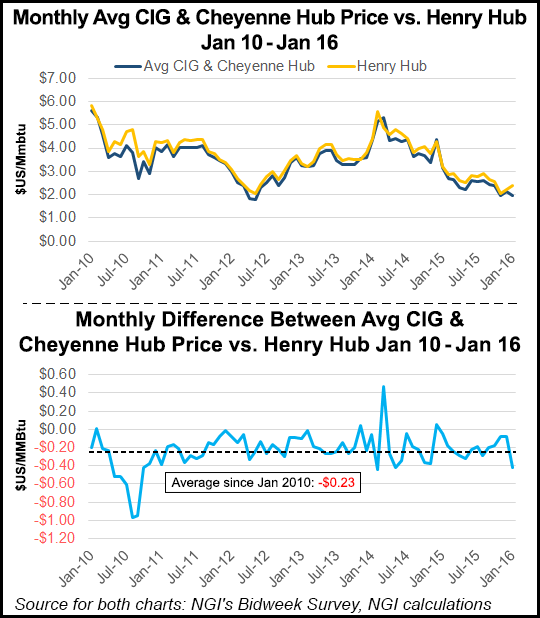 Involving multiple filings to the Colorado Public Utilities Commission (PUC) this week, the plan by Xcel’s Public Service Co. of Colorado utility is billed as a means of pushing Colorado forward “as a leader in energy innovation and economic development,” a Denver-based utility spokesperson said.

“We want to take advantage of some of today’s historically low gas prices for our distribution utility customers,” the spokesperson told NGI on Tuesday. “We intend to diversify our distribution gas portfolio, including ownership of reserves, partnering with a company [in the production side of the gas business].

Xcel officials will emphasize to the PUC that several other utilities around the nation (and others in Colorado) are either already doing this, or proposing to do so, as is South Dakota-based Black Hills Corp., which has proposals for its utilities in at least a half-dozen states to buy gas reserves (see Daily GPI, Oct. 5, 2015). “If we can lock in gas reserves at the going price now, we may not sell them to our customers for five years or more, but when we do go to sell, it acts like storage.”

Xcel is looking at the reserves eventually making up 25% to 50% of its gas supplies, the spokesperson said.

Calling it a first of its kind for the state, Xcel officials are hoping the plan will tie together a number of key technologies, economic development and customer-driven initiatives in 2016. Part of the effort is aimed at giving utility customers more control over their energy use, the utility spokesperson said.

Clean technology, alignment of retail utility rates, a solar choice program, added renewables and ultimately an intelligent grid program will emerge from this overall plan, the company told state regulators. “Closely associated with all of the initiatives will be Xcel’s efforts to meet the requirements of the federal clean power plan (CPP), which is being developed by key players in Colorado’s utility, governmental and environmental communities,” the Xcel spokesperson said.

Better interactivity, intelligence and efficiency in both its electric and gas grid systems are the goals for the plan, according to David Eves, president of Xcel’s Public Service Co. of Colorado. “We’re investing in a comprehensive plan now so that we’re prepared for the changing energy landscape of the future,” Eves said.

The broader goal for the program, as embodied in the gas reserve proposal, is an attempt by the state’s largest combination utility to help keep energy prices competitive as a means of helping make Colorado more attractive to future economic development, Eves said, adding that it will take collaboration with customers, regulators, elected officials and other stakeholders to achieve the goals.