Abandoned and unplugged oil and gas wells in Wyoming may be responsible for no more than 1% of reported methane emissions from the state’s oil and gas operations, according to research by the University of Wyoming’s (UW) Enhanced Oil Recovery Institute (EORI). 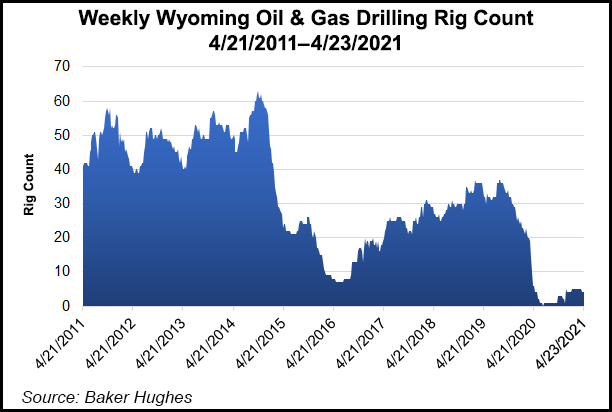 A sample of 10 orphan wells surveyed in Wyoming’s Powder River Basin by UW’s Department of Atmospheric Science accounted for 651 milligrams/hour (mg/h) of methane emissions. For comparison, the researchers noted that the average dairy cow emits 11,900 mg/h of methane.

The UW researchers determined that the 1,900 abandoned and unplugged wells in the state emit a total of 3.83 metric tons/year, less than 1% of reported methane emissions from all Wyoming oil and gas operations. The figures are based on data in the most recent National Emission Inventory by the U.S. Environmental Protection Agency.

Te authors noted that their data did not account for the 18,000 plugged wells in Wyoming, which release methane as a normal byproduct of oil and gas exploration and production.

According to the researchers, the boom of the oil and gas industry in the last decade has also led to increased bankruptcy filings by companies, which tends to result in an increase in unplugged wells.

Meanwhile, senior climate scientist Ilissa B. Ocko of the Environmental Defense Fund. writing in the journal Environmental Research Letters, said an immediate, full-scale effort to reduce methane emissions from the oil and gas industry, as well as a large-scale agricultural effort, could slow the worldwide rate of warming by up to 30%.

The paper highlighted how critical reducing methane is to slow the warming that is said to be responsible for stronger storms, hotter fire seasons, and melting Arctic sea ice. According to the U.S. National Oceanic and Atmospheric Administration, methane levels in the atmosphere are currently the highest on record.

According to the EDF research, the cheapest methods to achieve the needed methane emissions cuts exist in the oil and gas sector. If solutions that exist today were implemented over the next decade, they could result in one-half of the expected methane emissions in 2030. Half of the reduction solutions are achievable at no net cost, and around 80% of no-cost actions come from the oil and gas sector.

“Acting now and moving quickly to cut methane emissions is essential. Even modest delay would mean missing out on significant climate benefits,” said Ocko. “To realize these climate benefits, decision makers need to address methane directly and not assume the problem will resolve itself as a result of policies to reduce carbon dioxide.”