Wyoming regulators have decided to review rules for distancing oil and natural gas operations from developed areas, but they have delayed action on ways to reduce gas flaring. 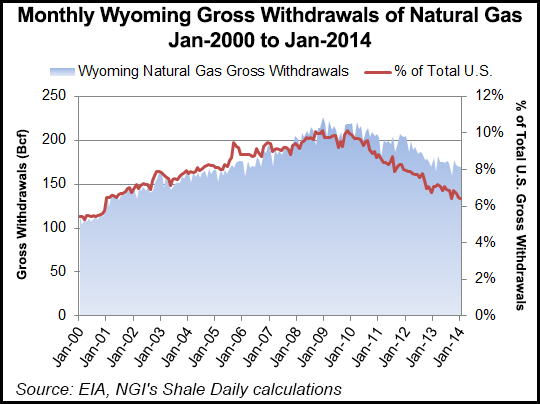 Interim Oil and Gas Conservation Commission (OGCC) Supervisor Mark Watson said regulators plan to study and make recommendations for current setback requirements that call for at least 350 feet of clearance between wells and homes and businesses. The review was mandated by Gov. Matt Mead at a recent OGCC meeting, he said.

Wyoming still needs to address gas flared at the wellhead, but regulators will put that issue aside until the setback review is completed. Bonding required for operators also would be addressed later, Watson said.

In a public hearing Tuesday, some landowners and environmental group representatives recommended that the state expand the setback requirements, claiming that some operations in close proximity to populated clusters are ruining property values and the quality of life. Watson said the commission is listening to the concerns. However, he conceded that the agency is understaffed and it may take time to complete the review.

Separately, Wyoming Attorney General Peter Michael said Wednesday the state in recent years has been far ahead of the federal government in addressing environmental and other protections as production has ramped up in the unconventional plays.

“In general, Wyoming has been more proactive in the last decade than the federal government when it comes to oil/gas regulations,” said Michael, in remarks at a day-long meeting in Denver of the western state attorneys general (AG). The Colorado Energy Summit, sponsored by the Western Governors’ Association, was billed as a first-ever AG meeting on hydraulic fracturing (fracking) and its ramifications for states.

Close to 10 years ago, he said, “we had a boom in coalbed development in the Powder River Basin, and it leaves us with the issue of what to do about abandoned wells.” The situation has worsened in some cases in which operators have declared bankruptcy or not shuttered abandoned wells properly.

“These are not fracking wells, but they need to properly plug and encase [in cement] those wells. It is still an issue that could come up in a fracking context.”