In an announcement that ends a two-year tug of war with the U.S. Environmental Protection Agency (EPA) over jurisdiction, Wyoming energy and environmental regulators will lead the investigation, working with the EPA, to continue the study of the potential impact of natural gas production activities in the Pavillion, WY, area on drinking water. 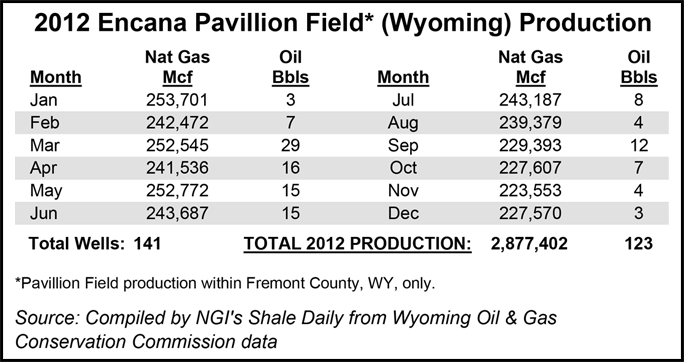 The Thursday announcement by Wyoming Gov. Matt Mead signaled the state’s domination of a broad-based collaborative effort including previous industry antagonists, the federal EPA and an assortment of state and nonprofit conservationist organizations. Having initially brought the public spotlight to bear on the Pavillion water issue, the EPA will suspend activity on its own investigation. The agreement is an outgrowth of one part of the governor’s 47-point energy strategy in which his policy adviser promised to avoid the controversy that previously surrounded the federal EPA work (see Shale Daily, May 17).

Producers claimed the announcement was another victory for state jurisdiction over their EPA nemesis. “Today’s announcement reaffirms that state regulators have the expertise on natural gas operations and are best positioned to oversee our industry. Once again, after several years of review, EPA has decided, as it did in Pennsylvania and Texas, that the states effectively regulate energy development. EPA’s reliance on Wyoming regulators and the fact that it is discontinuing work on its draft report shows that the science on this issue did not support a continuing federal role in Pavillion.”

Mead said the state intends to conclude its investigation, which will involve as many as 14 water wells in Pavillion’s oil/gas field, and release a final report by Sept. 30, 2014. “The state seeks to clarify water quality concerns and assess the need for any further action to protect drinking water resources,” he said.

The governor said he is seeking “an unbiased, scientifically supportable conclusion” regarding the Pavillion water, which has been the subject of two years of state-federal clashes since the EPA published a draft report on chemicals found in test water wells (see Shale Daily, Dec. 9, 2011).

In late 2011, EPA initially concluded that Pavillion groundwater contained chemicals that are normally used in natural gas production practices, such as hydraulic fracturing (fracking). At the request of Pavillion residents in 2008, the EPA originally began investigating water quality concerns in private drinking water wells, eventually prompting the state of Wyoming, the community of Pavillion and the owner of the gas field, Encana Corp., to join EPA to assess the water quality and identify potential sources of contamination.

“To date, after five phases of sampling, EPA’s domestic water well sampling results have documented constituents of concern; however a source of those constituents has not been determined,” said a spokesperson for Mead and the state. “EPA efforts to evaluate potential migration pathways from deeper gas production zones to shallower domestic water wells in the Pavillion gas field are inconclusive.”

“Unscientific testing could produce flawed results that could result in major adverse impacts on shale energy development and the vast potential it has to contribute to U.S. jobs, U.S. economic recovery and U.S. energy security,” Milito said.

Under the plans outlined by Mead, the Wyoming Department of Environmental Quality (DEQ) and Oil and Gas Conservation Commission (OGCC) will review of all relevant data and initiate “an additional science-based investigation.” Sampling data from the previous EPA work will be considered in Wyoming’s additional investigation work, Mead said.

The governor recognized that the federal agency has stood by its data and that some industry participants, such as Encana, have been highly critical of the work (see Shale Daily, Dec. 21, 2011), but the federal authorities have also recognized “Wyoming’s commitment for further investigation and efforts to provide clean water.”

With U.S. EPA not intending to make final its draft work from 2011 or to seek peer review of it, Mead said Wyoming’s DEQ and OGCC agencies will retain independent experts as needed to assist state staffs with the reviews, investigations, analyses and preparation of final reports.

“In light of this [state] announcement, we believe that EPA’s focus going forward should be on using our resources to support Wyoming’s efforts, which will build on EPA’s monitoring results,” said EPA Acting Administrator Bob Perciasepe, who added that he applauded Wyoming’s intention to conduct further investigations.

For its part, Encana, which has gas operations in and around Pavillion, said it will make a $1.5 million grant to the Wyoming Natural Resource Foundation to be used for further investigation by the state and “a statewide education and awareness program” through the Wyoming Association of Conservation Districts.

“Additionally, Encana will continue to provide interim funding to the Wyoming Association of Rural Water Systems, an independent entity that has been providing water for certain Pavillion residents.”

As outlined by the governor’s office, the state-led investigation will look at 14 domestic water wells in the Pavillion oil/gas field for further evaluation of water quality and various concerns. OGCC will then prepare a report concerning the status and reclamation of historic production pits in the Pavillion field. OGCC also will write a report assessing the integrity of all oil/gas exploration and production wells within 1,320 feet of the 14 domestic water wells.

Finally, the DEQ will evaluate the data, conclusions and recommendations by OGCC on well bore integrity and the pits. “In its review, the DEQ will consider all relevant data for each of the 14 domestic water wells,” said the governor’s spokesperson, adding that the DEQ work will include two rounds of sampling of some or all of the 14 water wells.

According to OGCC data, Encana had 141 wells operational in the Pavillion Field in Fremont County, WY, during 2012 with 2.88 Bcf in natural gas production and 123 bbl of oil.