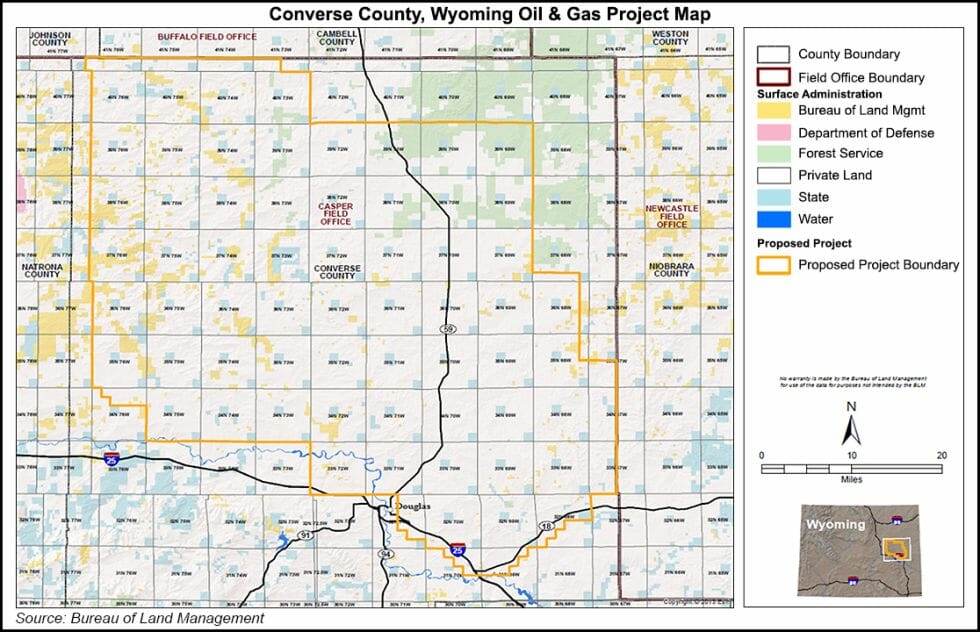 A draft EIS for the Converse County Oil and Gas Project was first issued by BLM in January 2018, but after evaluating public comments determined that a supplemental report was necessary to potential impacts to non-eagle raptor nests within two federal planning areas. The areas are administered by BLM’s Casper Resource Management Plan (RMP) and the U.S. Forest Service’s (USFS) Thunder Basin National Grasslands Land and Resource Management Plan.

BLM will accept comments on the supplemental draft EIS through July 25. The project area includes about 1.5 million acres in northern Converse County, 83% of which is private land. Of the remaining land, 6% (88,466 surface acres) is administered by BLM, 4% (63,911 acres) is managed by USFS and 7% (101,012 acres) is managed by the State of Wyoming.

The supplemental report analyzes five options for amending the Casper RMP. Besides a no action alternative, the options include removing all non-eagle raptor nest timing limitations or allowing development within the time constraints — either by a producer agreeing to certain commitments or agreeing to plans BLM determines would alleviate impacts to the birds. A fifth option would allow development within the timing limitations, contingent upon a producer completing a migratory bird conservation plan with the U.S. Fish and Wildlife Service (FWS), in coordination with the BLM.

An environmental group sued BLM in federal district court last November, alleging the bureau violated the Freedom of Information Act by refusing to disclose conversations it had with FWS on the project’s impacts to threatened and endangered species, including the greater sage grouse, elk, deer and fish.