Wyoming Gov. Matt Mead on Monday unveiled an updated state energy strategy with 11 new initiatives as priorities that include a mixture of fossil fuels, renewables and research. 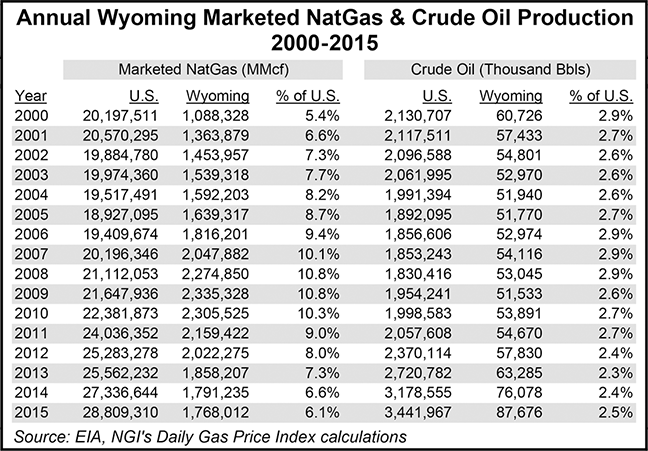 An important element of the state’s success has been improved federal-state relationships, Mead said in answering questions about the additions to his 45-initiative strategy, which was first introduced three years ago (see Daily GPI, May 14, 2013). The update is an outgrowth of six public meetings to gather input. Twenty-eight of the initiatives included in the 2013 plan have been completed.

The new initiatives are part of a plan to treat the 2013 strategy as a “living document” that can be supplemented as time passes, Mead said. “We wanted to address how we keep this going in a state that produces and exports more energy than any other state,” he said during a press conference in Cheyenne.

“Wyoming has a track record of excellence in energy development and stewardship, and the strategy is to provide a systematic approach [to continuing this tradition],” Mead said. “Today marks the beginning of a new implementation phase.”

A statewide push to advance clean coal technology and improved federal-state relationships are two of the areas Wyoming will continue to emphasize in the strategy, said Mead, who is seeking “some great research” in a developing energy integrated test center in Campbell County. He wants the center to examine what comes off a coal-fired plant to see if it can be used for a feedstock in the development of a range of products from graphene to petrochemicals.

The state center has received separate $10 million grants to look at coal-fired and gas-fired generation technology. Those projects will be the first tenants up at the test site, Mead said. “We want to continue to lead on this because we want to lead on energy production, innovation and research,” he said.

Many of the initiatives require coordination between the state and various federal agencies, and Mead said those relations have markedly improved in recent years as exemplified by a good working relationship that he has with Interior Secretary Sally Jewell and Fish and Wildlife Service Director Dan Ashe. “We don’t always agree, and that’s to be expected, but when we reached out on the 2013 strategy and talked about the collaborative process we want to engage in, most of the federal officials were encouraged by that because they like the state had grown weary of everyone doing their own thing,” he said. “The relationship is now good, and with the collaborative process it will continue to get better.”

Mead said the initiatives underlie his belief that as the nation’s top coal-producing state, Wyoming has “a responsibility to get answers related to clean energy.” Both the integrated test center and research at the University of Wyoming are aimed at this, he said. “If there is a concern about coal, we need to address that concern.

Mead said the state’s coal production has dropped from a peak of 410 million tons/year to 350 million tons this year under “terrible” market conditions. “Even at 300 million tons/year, we’d be the top-producing state, so we have to take a proactive stance and figure out how we can do better by coal,” Mead said.