Recognizing carbon sequestration needs to be part of the mix, Wyoming Gov. Mark Gordon on Monday pledged to continue advocating for the natural gas, oil and coal industries while pushing back against anti-fossil fuel advocates he called “myopic.” 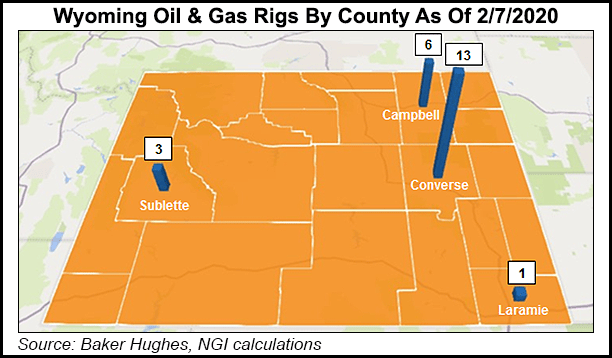 In his state-of-the-state address, Gordon said he would always “advocate for our industries, whether it be to protect against unconstitutional restraint of trade or support endeavors to deliver cleaner, more dependable, more affordable, and safer energy to our nation.”

Gordon said the state’s natural gas industry was under stress, with only two gas rigs now drilling in Wyoming, the lowest number in 20 years. He cited bankruptcies and production stoppage among gas operators.

“Estimates of natural gas revenues continue to spiral down, and I seek the legislature’s support in crafting a temporary price-based reduction in severance taxes for those most in need.”

Wyoming’s fossil fuel resources are “still discriminated against, maligned and decried as dead,” he said, despite operators’ track record of “producing energy better, more safely and with more environmental attention than anywhere on the planet.”

Regarding coal, Gordon told his audience in Cheyenne that the challenge is not the decline in the amount being burned in the nation, but there are opportunities to burn coal and use byproducts more beneficially.

In his second year in office, Gordon reminded the state that coal has been the most reliable source of U.S. electricity for more than a century. He challenged state officials to help make sure a major carbon capture and sequestration facility is built in Wyoming. He also wants a law enacted to require a “reasonable portion” of new electric generation to be “net carbon negative.”

Also on the agenda is pushing for more coal exports from the state, the governor said. Wyoming and Montana last month asked the U.S. Supreme Court to rule on the state of Washington’s denial of a permit for the proposed Millennium Bulk Terminals project. The port facility by Lighthouse Resources would be in Longview, WA.

Wyoming and Montana claim the denial violates the Commerce Clause of the U.S. Constitution, which prohibits states from impeding trade between one another and with other countries.

Gordon called Washington’s action “an arbitrary and capricious discrimination” against coal and “represents a direct threat to our products and Wyoming’s way of life.”

He also called for support for budget items proposed to support carbon dioxide sequestration. The governor wants $1 million for coal market augmentation and preservation, and $25 million to create what he calls an Energy Commercialization Program.

The commercialization effort would support technologies to advance zero or net-negative carbon for coal and other fossil fuels. “We must act now to prevent coal mines from closing,” he said.

Wyoming is “exceptional” in terms of its energy and minerals, he said, noting it leads the nation in coal, uranium and trona while it is eighth in oil and gas production and still supplies 11% of the U.S. electricity. “In fact, Wyoming is third in overall energy production,” he said.