Wyoming Gov. Mark Gordon is pushing to build up the state’s economic recovery through proposals and initiatives that he said would add value to the agriculture, tourism, and energy sectors. 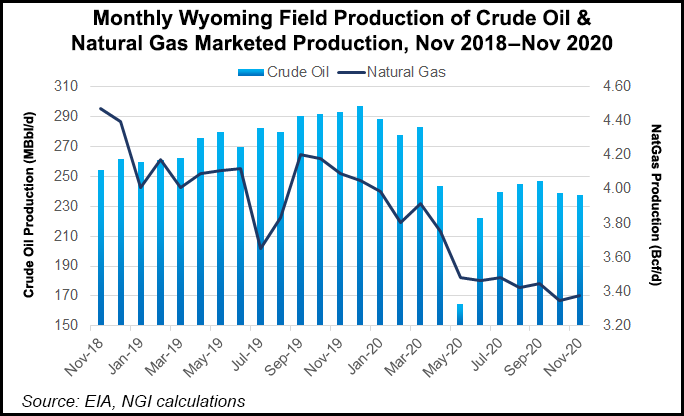 Taking an “all the above” approach, Gordon said he would seek to further bolster Wyoming’s energy and mining sectors. The governor supports bills allowing severance tax relief to the state’s energy industry, as well as expanding the abilities of the newly formed Wyoming Energy Authority to support the development of carbon capture technology.

“The energy and mining sectors are the major pillars of our economy and they have provided the wherewithal that gives this nation the luxury of looking to new forms of energy,” Gordon said.

“Let me be clear. Our traditional industries will adapt and continue to provide the reliable, affordable and dispatchable power they always have, only better. Our economic recovery will hinge on the health of these industries and their ability to adapt to changing market demands. Wyoming can continue to grow even as our mix of energy supplies evolve.”

Gordon added that despite the perception of the demise of coal, “we believe that coal, coupled with new technologies, is an essential part of the solution to reducing carbon dioxide in our atmosphere.

“Carbon capture and the development of carbon byproducts will be part of Wyoming’s energy future. So, too, should be efforts to research extracting the rare earth elements and critical minerals associated with coal that will be needed for the batteries powering the anticipated worldwide build-out of wind and solar power,” he said.

Notably, in an executive order (EO) on Jan. 27, President Biden directed the Department of the Interior to pause new oil and natural gas leasing on federal lands and offshore waters.

The Denver-based Western Energy Alliance, a regional oil and gas trade group, filed a lawsuit in the U.S. District Court for the District of Wyoming challenging the EO, stating that it violates the Mineral Leasing Act, National Environmental Policy Act, and the Federal Lands Policy and Management Act.

According to the Alliance, Wyoming has more federal acres leased than any other state, ranks No. 1 among states in federal natural gas production, and No. 3 in oil production on federal lands. According to the group, the EO would cost eight western states $33.5 billion total in economic output and roughly 59,000 jobs annually during Biden’s first term, with Wyoming and New Mexico hit hardest.

A study published in December by the University of Wyoming professor Timothy Considine found that a federal drilling ban could cost the state more than $300 million/year in lost tax revenue during the first five years.