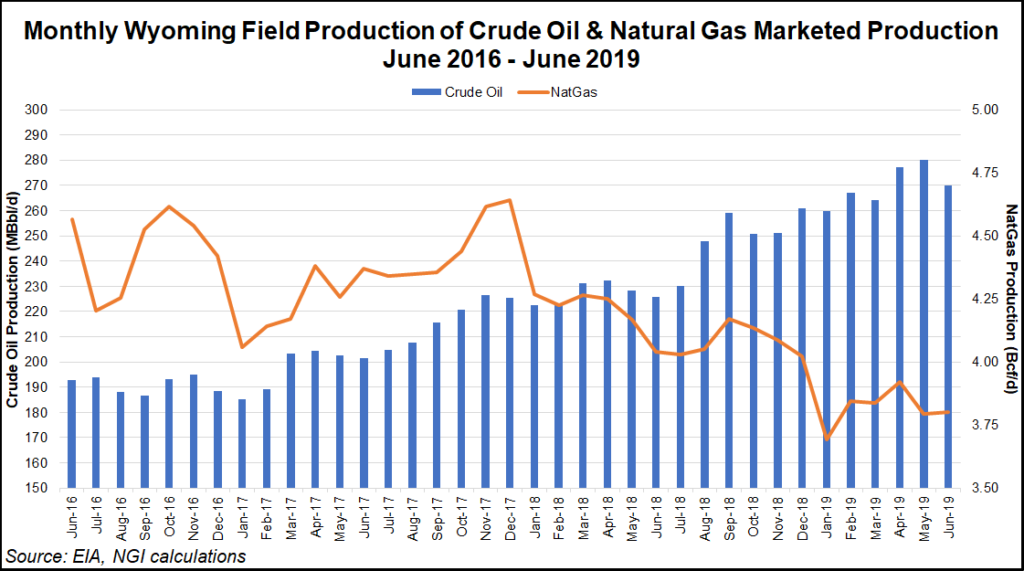 “Injection of field solution gas into the William Valentine discovery well under a cyclic gas stimulation test has been ongoing since June 2019,” CEO Glenn Dawson said. “Cuda has recently blocked up a significant land position of 12,500 net acres, primarily held by production at an average net royalty interest of over 80%.”

Production profiles of existing oil wells supported by Cuda’s 10-15 MMcf/d miscible gas flood facility are forecast to increase in response to the injected stream in six months to a year, Cuda said, citing a feasibility study conducted by engineering firm Ryder Scott Co LP. The recovery factor could increase to 38% of original oil in place at the end of 20 years and approach 50% after 30 years.

Currently, oil recovery from roughly 800,000 b/d of crude at Cuda’s Shannon pool is less than 1% of original oil in place.

Cuda expects to begin drilling operations in October. It is projecting that 29 oil wells and six injection wells will be operational at year’s end, with 6-7 MMcf of recombined gas stream going into the Shannon formation at pressures exceeding the reservoir pressure.

Cuda has also begun construction of a nine-mile natural gas pipeline from the connection point near Glenrock, WY, to the Barron Flats gas flood compression plant and an interconnection with the Tallgrass Energy LP’s system and provide make up gas for the miscible gas flood project this year. The right of way is surveyed but not yet acquired, the company said.

Cuda is also negotiating an oil pipeline connection to an existing pipeline at Glenrock Junction near Casper, WY, which would operate in 2020.

The focus on boosting recovery in the PRB comes on the heels of a major Canada divestiture that closed at the end of August. Cuda in late July inked a deal to sell all of its oil and gas assets, and related liabilities, in Quebec for C$10.59 million ($8 million). The company still has three wells in Alberta, with potential for further multi-well development.

The PRB continues to draw interest from larger U.S. operators including Devon Energy Corp. and Chesapeake Energy Corp. for its capacity to drive crude oil output.

“Unlike many other basins in North America, the Powder River Basin has ample takeaway capacity which translates into some of the industry’s highest netback oil production,” said Dawson.