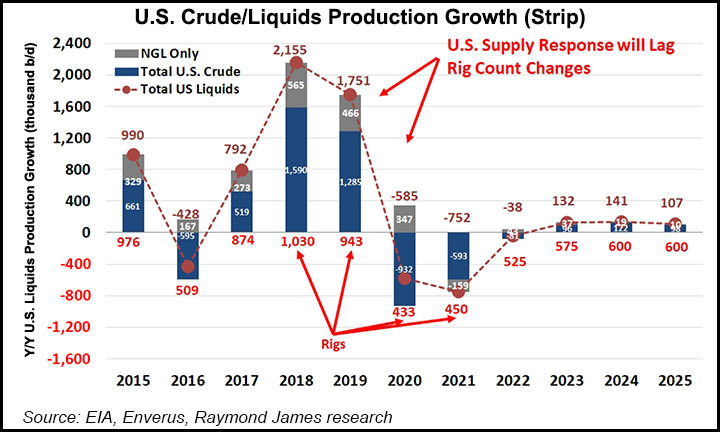 In addition to Saudi Arabia’s efforts, members of the Organization of the Petroleum Exporting Countries and its allies, aka OPEC-plus, agreed last Thursday to hold the line on oil production through April.

“Our strip scenario still sees substantial draws in both 2021 and 2022 — on the order of several million barrels per day for the next two years,” Raymond James analyst John Freeman said. “Clearly, even to a casual observer of oil markets, draws of this magnitude cannot exist for that prolonged of a period — meaning prices need to rise meaningfully off the current strip in order to incentivize enough production growth and/or destroy enough demand to balance the market.”

He said the Raymond James team expects West Texas Intermediate (WTI) prices to reach $75/bbl before the end of 2021 and average $68, followed by an average of $72 next year.

At the start of the year, the Raymond James analysts were forecasting WTI at $50/bbl in the first quarter and $65 by the end of the year.

“All told, we think this oil price level is needed the next few years to allow the market to be more or less balanced in 2023,” Freeman said, noting an anticipated economic acceleration post-pandemic that could drive strong demand for transportation fuels.

Oil prices have rallied this year on the combination of OPEC production curtailments and rising expectations for a rebound following the demand destruction imposed by the pandemic in 2020.

“The higher prices will incentivize more rigs to be deployed in the U.S.,” Wood Mackenzie analyst Dan Spangler said Monday.

But analysts increasingly expect that demand gains will exceed output throughout most of 2021.

“Since the beginning of December, 64 oil rigs have been added (up 26%) and 17 natural gas-directed rigs (up 23%),” the EBW team said. “Still, upstream capital investment remains far below pre-pandemic highs. Oil rigs are down 54% compared to the beginning of last year…Notably, recent rig additions do not immediately contribute to new production. Instead, newly added rigs are unlikely to add to new production for several months, delaying any impact to supply.”

Barclays analysts recently lifted their 2021 oil price forecast, noting that light production would support continued price momentum this year. The analysts boosted their Brent crude oil price outlook by $7 to $62 and their WTI crude estimate by $6 to $58.

BofA Global Research analysts said in February they increased their average Brent crude price forecast to $60 for 2021, up from a previous forecast of $50. “We also believe prices could temporarily spike to $70/bbl.”

Expectations for mounting demand are helping to fuel optimism.

The U.S. Energy Information Administration forecasted global oil consumption would grow by 5.6 million b/d, or 6%, this year. The United States will account for 1.4 million b/d of that growth, the agency said, based on an expectation for widespread inoculations.