U.S. oil prices were tracking on Friday toward a 76% gain for the month of May as shut-in wells and a pullback in activity pushed prices higher, but a rebound for the energy sector is expected to be neither swift nor even. 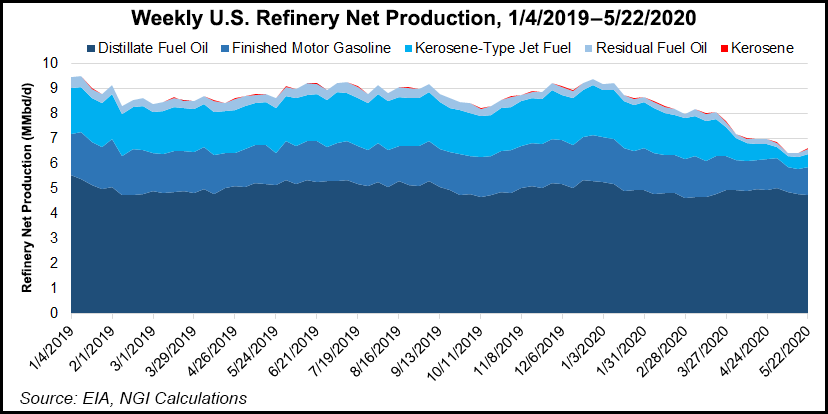 West Texas Intermediate (WTI) oil prices were strengthening as May came to an end, with front month prices early Friday tracking above $33/bbl. The WTI price was still about half of the January high of $65.65.

The Federal Reserve Bank keeps a sharp eye on all activity across the country. In the latest Beige Book issued Wednesday, which summarizes nationwide economic conditions in each of the 12 districts, there were paltry indications that things were getting better.

The energy-rich Eleventh District based in Dallas, aka the Dallas Fed, usually draws the most oil and gas interest as executives are surveyed in Texas, northern Louisiana and most of New Mexico, home of the Permian Basin, as well as the Eagle Ford and Haynesville shales.

Preliminary data from May pointed to a “notable easing in the pace of decline as restrictions on businesses were gradually lifted,” the Dallas Fed economists said. However, activity in the energy and service sectors “remained the hardest hit.”

A survey across the Eleventh District that was conducted earlier in May found revenue levels for most of the Texas manufacturing and service firms “were down markedly compared with a typical May, and about a fifth said they would not be able to survive past six months if revenues did not improve. Outlooks remained weak due to uncertainty surrounding the pace and scope of the reopening of the district economy.”

A similar survey of 400 Texas businesses conducted in April of the services/manufacturing sectors, which includes energy firms, found 47% had temporarily/permanently laid off workers, while 63% had reduced hours.

“Energy contacts said oilfield workers were being furloughed or laid off in tandem with declining activity, and cuts were also widespread at corporate offices,” said the Dallas-based economists. “A large rail firm said they have furloughed about 5,000 workers due to decreased traffic, and there were a few reports of employment cuts in real estate and construction.”

Some firms in the Eleventh District that were calling workers back in May said the “fear of infection, lack of childcare and generous unemployment insurance (UI) benefits were preventing some workers from returning. A few staffing firms noted difficulty recruiting due to increased UI benefits. Wages were flat to down, with auto dealers and energy firms among others noting reduced benefits and pay.”

Across the Eleventh District, “manufacturers of transportation equipment and those tied to the oil and gas sector” have been among the hardest hit.

The recent Dallas Fed survey confirmed what was evident in first quarter conference calls. Drilling and completion activity has fallen to record lows “as depressed prices and storage constraints forced many firms to shut-in production.” The smaller exploration and production firms had idled most of their completion crews, while larger operators had idled about half of the fracturing operations.

“Bankruptcies are expected to spike due to ongoing funding constraints,” said the Dallas Fed economists.

While those surveyed indicated “activity may be nearing a bottom,” a recovery likely will be slow as most have “expectations of low crude oil prices through 2021.”

Rystad Energy, which has reported weekly on energy demand/outlooks as the Covid-19 pandemic has raged, said Friday in its 12th analysis that global oil demand is projected to decline year/year by 11.5% in 2020, by 11.4 million b/d.

For 2021, preliminary estimates put demand at 46 million b/d on average.

It’s no surprise that jet fuel consumption has taken the biggest hit. Rystad said demand could be off by almost half from 2019 when all is said and done.

Rystad analysts now are assuming that the “common summer air travel peak will not occur at all this year. We see global jet fuel demand falling by almost 40.8% year/year, or by at least 2.9 million b/d. Last year’s demand for jet fuel was about 7.2 million b/d.”

Specifically in the United States, total oil demand this year is forecast to fall by 11.8% year/year to 18.1 million b/d, Rystad analysts said. April oil demand was down by almost 31% from a year earlier and May demand is forecast to slump by nearly 23%. Meanwhile, June consumption is expected to decline by almost 18%.