In its first full fall forecast of the year, Weather Services International (WSI) said it expects temperatures nationally to average cooler than normal from the Northern Plains into the Ohio Valley over the next three months, with above-normal temperatures elsewhere, particularly across portions of Texas and the Southwest. 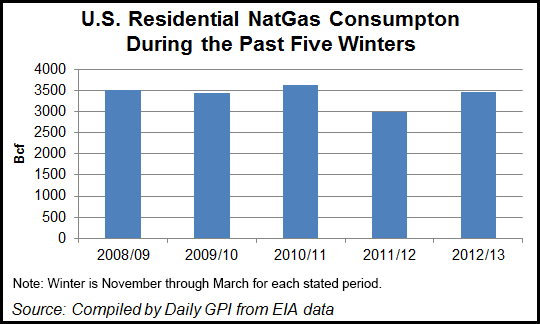 “The lack of significant heat in the eastern United States this past summer, combined with a lackluster tropical season, have resulted in a relative lack of market-sensitive weather events compared to recent years,” said WSI Chief Meteorologist Todd Crawford. “However, recent trends in both climate models and our statistical models are becoming more suggestive of a cold start to heating season, especially by November, across the population-rich areas of the North Central and Great Lakes states.”

Temperatures are expected to average warmer than normal over the entire country in October, except Florida, Washington and Idaho, the WSI forecasters said. That would keep weather-related natural gas demand below season norms for the month, according to Energy Securities Analysis Inc. Senior Analyst Chris Kostas.

“Assuming the forecast for mild late-autumn seasonal demand, we expect natural gas inventories will finish the injection season near 3,900 Bcf (just below last year’s historic record of 3,929 Bcf),” Kostas said. “Delivered gas prices in the Mid-Atlantic and Northeast regions should remain subdued in October and will likely average below Henry Hub due to strong regional production levels and mild seasonal demand.”

There was 3,299 Bcf of natural gas in storage for the week ending Sept. 13, 187 Bcf less than a year earlier and 18 Bcf more than the five-year average, according to the EIA Weekly Gas Storage Report.

“Colder-than-normal Midwest and Mid-Atlantic temperatures in November should boost gas demand and energy prices following the mild temperatures and subdued prices of October,” Kostas said. “Stronger regional demand should also help to lift delivered gas prices in the Mid-Atlantic region from the very soft levels expected in October. New York and New England may be spared from significantly higher prices, however, as warmer-than-normal temperatures are expected in those markets. Delivered gas prices for TZ6-NY [Transco Zone 6 NY] will likely be soft, given the November weather outlook. Algonquin Citygates prices in New England have been firm over the past 12 months, but with mild temperatures expected in November and increased gas production at Deep Panuke, spreads to Henry Hub will likely be softer than those seen last year.”

The North Central area is expected to average colder than normal in December, while the rest of the country is forecast to be warmer than normal, WSI said. That mixed picture would leave prices in New York City and elsewhere in the east “subdued,” Kostas said.

“In New England, December Algonquin Citygates prices have been very firm, with forward price expectation near $8.50/MMBtu (compared to $4.00/MMBtu for Henry Hub),” he said. “Prices in New England will likely settle at lower levels if temperatures come in warmer than normal as expected.”

An early look at indicators suggest that later winter months may be characterized by more widespread cold, Crawford said.

“Our first look at the November-January period suggests that aggregate natural gas usage for heating will be up 9% year-over-year,” he said.

Residential use of natural gas, which is the sector most sensitive to weather impacts, was 3,470 Bcf last winter, according to Energy Information Administration data. That was up significantly from 2,989 Bcf in 2011-2012, the low point for residential consumption over the past five years. U.S. residential natural gas consumption during winter months has averaged 3,410 Bcf since 2008-2009.

Forecasters at the Farmers’ Almanac have said they expect the upcoming winter will be colder than normal for most of the United States, including New England, a forecast that would have furnaces working overtime in some of the nation’s largest population centers (see Daily GPI, Aug. 27). In its extended forecast, Farmers’ Almanac said it is “red-flagging” the first 10 days of February for possible heavy winter weather, and believes that mid-March “could bring a wave of storminess stretching almost from coast to coast, bringing a wide variety of precipitation types as well as strong and gusty winds.”