In a flurry of activity this week, WPX Energy Inc. said farewell to CEO Ralph A. Hill, who stepped down unexpectedly, named an interim replacement, increased the size of its board of directors, and promised to add a new board member nominated by one of its major shareholders. 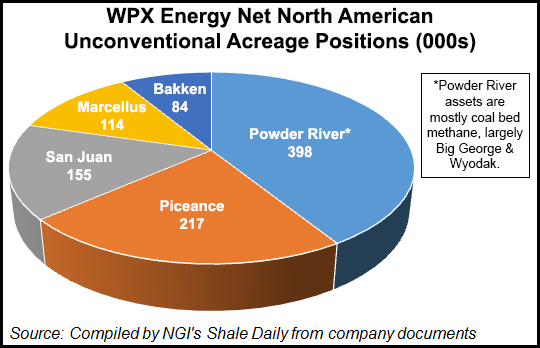 On Tuesday the exploration and production company announced that Hill would step down as CEO, president and board member in a move toward gaining a “fresh perspective,” looking toward a “critical review” of the company’s strategic direction. At the same time the company said it would take on a new board member to be proposed by hedge fund Taconic Capital Advisors LP, which holds 6.9% of WPX outstanding shares.

The board appointed James J. Bender as interim president, CEO and board member effective Dec. 31. Hill will remain with the company through March 31 to assist with the transition of his duties, WPX said.

Hill spent more than 32 years with WPX and Williams, from which WPX spun off at the beginning of 2012 (see Daily GPI, Dec. 29, 2011). “Over the past decade, he and his team were instrumental in building WPX into one of the nation’s largest domestic natural gas producers,” culminating in WPX’s successful spinoff, WPX said.

A four-member search committee of the board of directors has been established and an executive recruiting firm has been retained to assist in an external CEO search.

“The board of directors firmly believes that now is the right time for a leadership change at WPX Energy in order to bring a fresh perspective and determine a long-term strategy that will position the company for future success,” Chairman William Lowrie said in a letter to WPX employees. “Thanks to all of your efforts, we have accomplished a lot in the two years since the company was founded, especially in light of the challenging natural gas price environment. However, as we think about the next few years, it is imperative to find the right leader to perform a critical review of our strategic direction and enhance our operating and financial performance.”

On Wednesday, WPX said it had reached an agreement with Taconic Capital to increase the size of its board of directors from 11 to 12 by Jan. 10. “The newly created board seat will be filled by one of two independent candidates with significant oil and gas exploration and production experience provided by Taconic,” and will be added to the CEO search committee, the company said. Under the terms of the agreement, Taconic said it will vote its shares in support of all of the board’s director nominees at WPX’s 2014 shareholders meeting.

“We are extremely pleased with this agreement and the company’s decision to recommit to its recently announced strategy of optimizing and focusing its portfolio of assets and allocating capital in a disciplined and strategic manner,” said Michael Schwartz, a principal and portfolio manager at Taconic. “This is the best outcome for all shareholders and a constructive agreement by the board to improve WPX’s strategic direction.”

Hill’s exit and the change in the makeup of the WPX board are a net positive, Tudor, Pickering, Holt & Co. analysts said in a note Wednesday morning, but “redirecting the company’s assets and capital will take time (years, not months) and [the] stock remains fairly valued.”