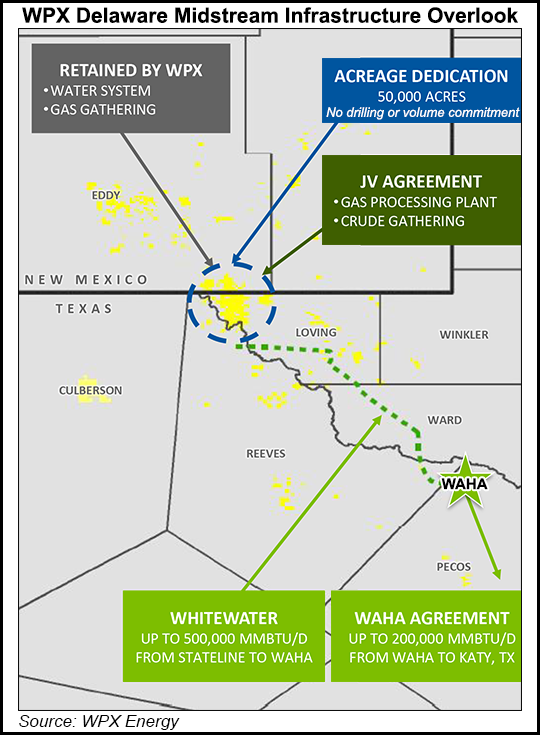 The 50-50 joint venture (JV) announced Tuesday would support WPX drilling in the Stateline area, representing 50,000 net acres, or 37%, of the Tulsa-based producer’s 135,000 net-acre position in the sub-basin. Separately, WPX secured additional takeaway capacity for its Delaware natural gas volumes and an equity position in the related pipeline.

“Our approach to supporting our growth plans in the Delaware Basin uniquely differentiates WPX,” said CEO Rick Muncrief. “As a producer, this is a bold and innovative way to lay a well-defined path for our expected volumes and create an additional platform for generating shareholder value.”

Muncrief had said in February that WPX was working on a midstream infrastructure plan for oil and gas to help build out its growing Permian operations. More than half of the WPX capital budget this year, estimated at $870-940 million, is targeting the Delaware, with another $35-40 million to build out the crude oil gathering system, which began initial operations in late 2016.

The Howard agreement “breaks new ground on both fronts,” Muncrief said. “For starters, our forward-looking action gives our long-term Delaware development a competitive advantage. Second, we’re looking at the bigger picture and how to extend value creation beyond the drill bit by creating a premier Delaware midstream service provider.”

Howard offers “the right skills, capabilities and focus to make this joint venture a success,” he said. Among other things, the San Antonio-based partnership is helping finance Impulsora Pipeline LLC, designed to carry natural gas from Texas to Mexico.

Included in the new JV are WPX crude oil gathering assets now under construction and a planned natural gas processing complex. Not included are WPX gas and water gathering systems in the Stateline area, which consist of more than 375 miles of existing infrastructure, nor its midstream rights to remaining acreage in the sub-basin.

The JV plans to complete building out a crude oil gathering system, already started by WPX in the basin, and begin constructing a cryogenic natural gas processing complex with a planned initial capacity of 400 MMcf/d. The parties also plan to seek out third-party volumes in an area of mutual interest in the Delaware.

For its natural gas, WPX said the first 200 MMcf/d train for the cryogenic gas processing complex also is set for completion by mid-2018, with a second train to double capacity planned by mid-2019. WPX is actively securing long-term takeaway capacity in the basin for its associated gas production after recently signing an agreement to ship, beginning in November, up to 200,000 MMBtu/d from the Waha Hub to Katy, TX.

Agua Blanca initially would consist of 75 miles of 36-inch diameter pipe with a capacity of 1.25 Bcf/d, expandable to 1.75 Bcf/d. WhiteWater expects to accept first volumes from the Stateline area in the first half of 2018. The initial path of Agua Blanca would be from Orla, TX to Waha, servicing portions of the West Texas counties of Culberson, Loving, Pecos, Reeves and Ward. Agua Blanca is to have multiple direct downstream connections, including to the Trans-Pecos Header.

WhiteWater, based in Austin, TX, is backed by a $200 million private equity commitment from Denham Capital Management and Ridgemont Equity Partners.

For its crude oil volumes, WPX already has installed close to half of the planned 50-mile gathering system that initiated service in late 2016. Forty wells now are tied in, some of which are awaiting completion before starting deliveries into the system. The trunkline, designed to have a capacity of 125,000 b/d of oil, should be completed in the first half of 2018.

“Historically, producer-backed midstream companies have performed well given the strong alignment of interests,” said CEO Mike Howard. “We are excited about the strategic partnership with WPX, one of the strongest players in the Permian Basin, and the positive implications it has for our business.

“This joint venture not only diversifies Howard Energy Partners’ footprint into the most prolific basin in the nation, but it demonstrates our team’s ability to differentiate ourselves among our competitors and to raise significant capital for large-scale infrastructure projects.”

According to WPX, the transaction implies a $863 million value for Stateline midstream projects. The independent is receiving $300 million upfront from Howard, and Howard is funding the first $263 million of JV capital expenditures, including a $132 million carry. There are no minimum volume or drilling commitments.

If things go to plan, the transaction should be completed by the end of September. The partners plan to begin integrating their efforts before the closing.