WPX Energy Inc., which has eschewed its natural gas-heavy portfolio for onshore oil prospects, has added 14,300 net acres in the San Juan Basin’s Gallup formation to its portfolio. 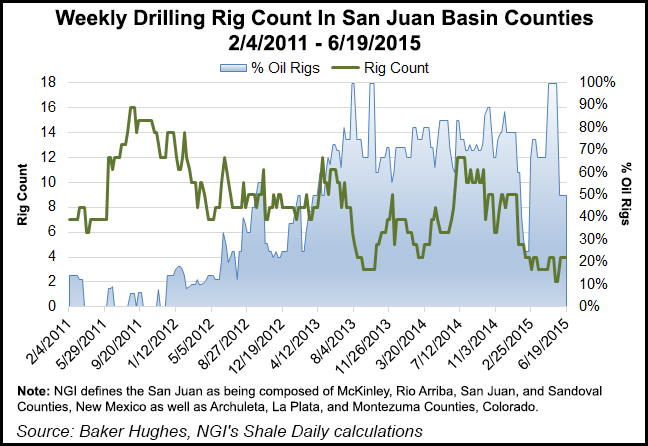 The $26 million transaction with an undisclosed seller includes around 100 drilling locations, which would boost the Tulsa independent’s Mancos Gallup Sandstone locations to around 500.

Management was confident enough in the Gallup discovery in 2014 to swap coalbed methane properties in the Powder River Basin for a bigger slice of San Juan leasehold (see Shale Daily, Aug. 20, 2014).

Over the past two years, drilling times on Gallup wells have dropped by 75%, according to WPX. Two recent wells in the play each were drilled in less than eight days. Between April and June, average drill time has averaged 9.8 days/well.

The latest acquisition “reflects our confidence in our ability to achieve $4 million well costs and estimated ultimate recoveries of 450,000 boe per well,” CEO Rick Muncrief said.

Overall drilling and completion costs in the Gallup have dropped year/year by 25% to date this year. Oil volumes from the play in the first three months of this year also have averaged 8,100 b/d.

Management said it also is increasing its returns in the oil development by building company owned and operated oil, gas and water gathering systems. In addition, it said steps have been made to lower the basis differential on Gallup sales to $8-10.00/bbl from $13.00.