While reporting everything except gas capture as a plus in North Dakota’s most recent production statistics, Lynn Helms, the state’s chief oil/natural gas regulator, said last Tuesday that the worst of the two-plus years of depressed oil prices is over. 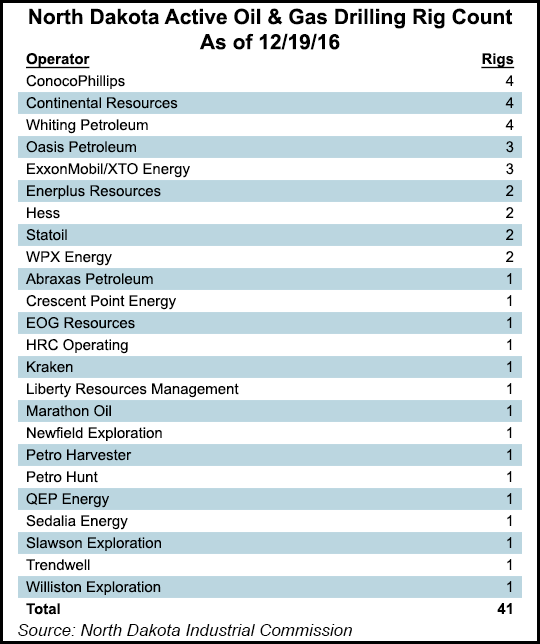 Helms expects rising prices and production to return next year, along with less regulation from the incoming Trump administration.

“Oil prices are up, activity is up and production is up,” said Helms, director of North Dakota’s Department of Mineral Resources. “With the exception of gas capture, everything was a plus in October,” the latest period for which there are complete statistics.

“Unless we see some surprise that drops prices below $50/bbl, the worst should be behind us. From this point, there may be some production decline before it turns back up, but I think the worst is behind for the industry, jobs, and reduced investment.”

Even though he doesn’t expect his state’s oil production to stay above 1 million b/d for the short term, Helms anticipates the rig count, which is currently 40, reaching 50 by mid-summer 2017, and eventually a total of 60 rigs bringing the state back to production above the 1 million b/d level. He expects prices for Bakken sweet crude oil to average $45/bbl in the first quarter of the new year.

Helms said that the October production surge for both oil and gas underscored the importance of prices staying above $40/bbl.

“The $40 level is a very important price signal,” Helms said. “That price, which we had not seen on a sustained basis for 18 months, allows operators to keep wells on production and eventually operate them at full capacity. It is the equivalent of $45/bbl WTI prices, which is an important signal for flowing wells at full capacity, and $50/bbl WTI is an important signal for moving in a lot more hydraulic fracturing crews.”

Helms also indicated that he thinks there will be less friction between the state and federal government as now is exemplified by five court challenges North Dakota is involved in challenging the Obama administration’s rules at the Bureau of Land Management and Environmental Protection Agency. He expects a more “industry friendly” White House with the new administration.

“What we have seen over the last six to eight years, such as the hydraulic fracturing-drinking water study, has put us in a situation where we’re now litigating five different rules. I wouldn’t anticipate anything like that out of the new administration.

“I think the emphasis going forward will be on capital expenditures, good regulations and increased production, as opposed to dealing with federal rules.”