Facing a projected natural gas supply shortage that could begin next year, state-owned PetroVietnam said earlier this month that along with its partners it plans to start construction of the Thi Vai liquefied natural gas (LNG) import terminal, Vietnam’s first, in the southern Ba Ria-Vung Tau province. 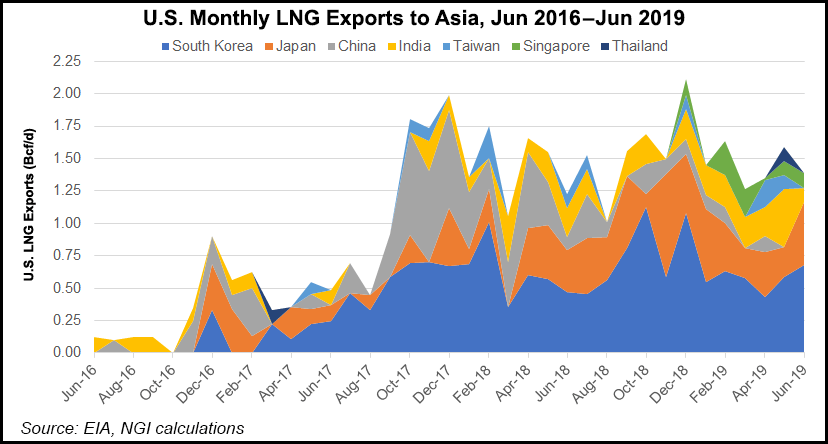 Vietnam has increasingly focused on building LNG infrastructure, and the first phase of the Thi Vai project, which would have a capacity of 1 million metric tons/year (mmty), is scheduled to be completed by the third quarter of 2022. Capacity is expected to triple by 2023 as part of the project’s second phase. The terminal would supply gas to domestic power plants and industrial buyers.

Under Vietnam’s natural gas industry development plan, the country plans to have at least six LNG import terminals in operation by 2025 at a total cost of more than $6 billion. Some projections are for as many as 10 LNG facilities that could be operational in Vietnam within the next decade.

Declining domestic gas production and rising power demand in Vietnam could see a bigger role for LNG if integrated power projects can progress, according to Wood Mackenzie.

“The LNG development plan for Vietnam seems to have taken two directions: the planned route underpinned by LNG projects outlined in the Gas Plan, and the ”wildcards’ path where private investors seek out viable integrated LNG-to-power projects with the support of local governments,” Wood Mackenzie analysts said.

PetroVietnam is also planning a second terminal, Son My LNG, with multiple phases, the first of which would have a capacity of 3.6 mmty. PetroVietnam Gas JSC inked a memorandum of understanding (MOU) with Virginia-based AES Corp. for collaboration on the project during President Trump’s state visit to Vietnam in November 2017. Since then, AES representatives have traveled to Vietnam a number of times to meet with Vietnamese officials.

Companies from several other countries have also expressed interest in Vietnam’s fledgling LNG sector. In May, Russia’s largest independent gas producer, Novatek, signed an MOU with Vietnam’s Ninh Thuan Provincial People’s Committee to develop an integrated energy-generating project in the country that will also use LNG. The project provides for the delivery of LNG utilizing existing infrastructure as well as developing new infrastructure, including the construction of an LNG regasification terminal and new gas-fired power plants in Vietnam.

In March, Virginia-based Gen X Energy, an affiliate of Blackstone Energy Partners, sent representatives to meet Ba Ria-Vung Tau provincial leaders to discuss building a gas-fueled power center and an LNG storage facility, with an estimated cost of nearly $6 billion. If approved, the project would be carried out in three stages, with the first expected to be completed by 2023, the second by 2026 and the last by 2030. It would have a gasification capacity of 9 mmty, gas storage capacity of 800,000 cubic meters and total power generation capacity of up to 6,000 megawatts.

Vietnam has also been signing off-take agreements with gas suppliers. Last week, Australia-based LNG Ltd signed a deal with the coastal province of Bac Lieu in Vietnam to supply 2 mmty of LNG from its Louisiana-based Magnolia project to the Bac Lieu LNG-to-power project.

Malaysian oil and gas major Petroliam Nasional Berhad, aka Petronas, signed a binding heads of agreement with PetroVietnam in March for the sale and purchase of additional gas from Block PM3 CAA, Malaysia to Ca Mau Province, Vietnam.

Traditional gas and power players will support the traditional LNG projects such as Thi Vai and Son My, but wildcard projects, such as the Bac Lieu project, are also gaining traction, according to Wood Mackenzie.

Because of increased population and economic growth, the country has been looking for alternative energy sources to offset gas production declines. The World Bank estimates that Vietnam’s electricity demand will expand by around 8% per year over the next decade, and said the country needs to invest $150 billion by 2030 to develop its energy sector.

Japan is the top LNG importer, followed by China, South Korea, India and Taiwan. New LNG importers have emerged in recent years in Asia, including Indonesia, Malaysia, Pakistan, Singapore and Thailand, while Bangladesh, Myanmar, the Philippines and Vietnam are expected to follow suit, according to a report by DNV GL in April. The International Energy Agency earlier this year said Southeast Asia is on track to become the heart of future LNG demand growth to 2024.