Construction has begun on the Los Ramones Phase II South pipeline, a segment of the larger Ramones natural gas pipeline system, which runs from the Texas-Mexico border to central Mexico and is one of the country’s largest energy infrastructure projects ever, according to developers. 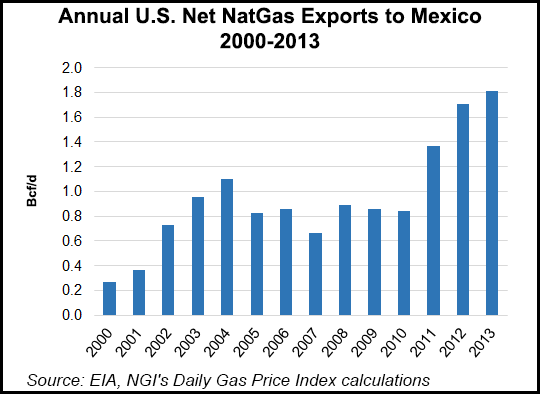 GDF Suez and Petroleos Mexicanos (Pemex) are joint venture partners in Los Ramones Phase II South. The segment is to run about 181 miles from San Luis Potosi to Apaseo El Alto, Guanajuato. It is expected to cost US$1 billion, have capacity to carry 1.4 Bcf/d and be completed by the end of 2015.

“This investment demonstrates our group’s confidence in Mexico’s growing economy and our commitment to play an important role as an investor in Mexico’s energy future,” said GDF Suez CEO Gerard Mestrallet.

ICA Fluor has been contracted to construct the 42-inch diameter pipeline, which will be operated by GDF Suez after completion

The entire Los Ramones pipeline, which runs from Agua Dulce, TX, is to be about 621 miles long and will allow for the importation of up to 2.1 Bcf/d of natural gas from the United States, according to GDF Suez.

Pemex recently formed an alliance with Mercuria and JP Morgan to import U.S. gas into the country. The startup of the venture is expected to be coordinated with the in-service of the Los Ramones pipeline (see Daily GPI, Aug. 1).

Mexico’s reliance on natural gas from the United States has continued to grow in recent years (see Daily GPI, July 3) as government-controlled Pemex has turned its limited resources to more valuable oil production. However, recent government reforms that have broken Pemex’s 75-year monopoly are expected to stimulate production with the help of resources of outside investors (see Daily GPI, Aug. 14).