The proposed Calcasieu Pass liquefied natural gas (LNG) export project in Louisiana has secured a draft environmental impact statement from FERC, and sponsors of a Corpus Christi export terminal in South Texas have asked for permission to begin commissioning operations for its first LNG train. 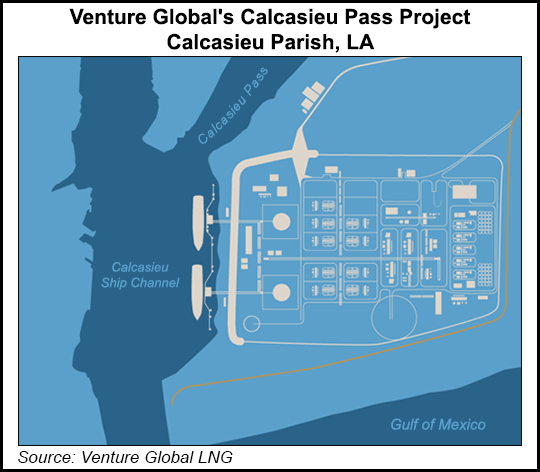 The Federal Energy Regulatory Commission said that while the Calcasieu Pass project would create adverse environmental impacts, most would be temporary or short-term and the remainder “would be reduced to less than significant levels” if the project’s backers adhere to a list of mitigation measures.

In a draft environmental impact statement (DEIS) issued Friday, FERC said Calcasieu Pass, a project proposed by Venture Global Calcasieu Pass LLC (VGCP) and TransCameron Pipeline LLC, would impact the environment. But Commission staff added that a list of 118 recommendations, if adopted by the project’s backers, “would appropriately and reasonably reduce the environmental impacts resulting from construction and operation of the project.

“Therefore, we are recommending that our mitigation measures be attached as conditions to any authorization issued by the Commission.” FERC will accept public comments on the DEIS until August 13.

The Calcasieu Pass Project, which would be built on a 930-acre site in Cameron Parish, LA, calls for construction of liquefaction facilities with a design production capacity of 12 million metric tons/year (mmty) of LNG. It also includes two 200,000 cubic meter LNG storage tanks; two LNG berthing docks, designed to handle carriers of 120,000-210,000 cubic meter cargo capacity; and a 1,500-foot by 3,000-foot turning basin adjacent to the Calcasieu River Ship Channel. All would be built and operated by VGCP, a subsidiary of Venture Global LNG [CP15-550].

The project also calls for constructing 23.4 miles of 42-inch diameter pipeline to bring feed gas to the terminal site. The pipeline, which would have interconnections with ANR Pipeline Co., Texas Eastern Transmission LP and Bridgeline Holdings LP –and associated infrastructure would be built and operated by TransCameron [CP15-551].

VGCP and TransCameron filed a joint application for FERC authorization of Calcasieu Pass in September 2015. The project is tentatively scheduled to begin operations in 2022.

In a June 7 filing, CCL asked FERC for permission to introduce fuel gas to commission Train 1. It requested the Commission make a decision on the authorization by Friday (June 29) [CP12-507].

Last month, Cheniere made a final investment decision (FID) to build a third train at the CCL Project. It also issued a notice to proceed to engineering, procurement and contractor firm Bechtel Oil, Gas and Chemicals Inc. to ramp up construction of the facility.

Each train of the CCL Project is expected to have a nominal production capacity of about 4.5 mmty. The first two trains are scheduled to begin service in 2019; an LNG train takes about four years to build. The move to expand the Corpus Christi facility is the country’s first natural gas export-related FID in three years.